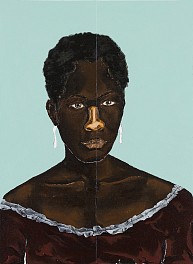 Dalton Paula was born in 1982 in Brasilia and lives in Goiânia.

Paula works with painting, photography, and installation to explore the exigencies of the Black Atlantic, knowledge production in the long wake of racial violence, and the religious rites and rituals of the African diaspora.

Of particular note are his large-scale paintings, spartan assemblages of objects over abstracted earth-toned backgrounds, and portraits. Paula’s ongoing interest in portraiture reflects his deep engagement with the framework of Brazilian history; his subjects are often historical figures whose faces have never been recorded, such as Zeferina, a woman who founded a community for escaped slaves in Northern Brazil.  His installation work continues this line of inquiry and further develops his rich symbolic language and appreciation of material culture.

In 2022, Dalton Paula: Portraits opened at Museu de Arte de São Paulo and a solo exhibition of the artists work will open at Pinacoteca de Sāo Paulo in October 2022.