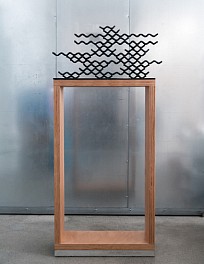 Diango Hernández (b. 1970, Sancti Spiritus, Cuba) began his artistic practice in Cuba in 1994 as a co-founder of Ordo Amoris Cabinet, a group of artists and designers who focused on invented solutions for home design objects to compensate for a permanent shortage of materials and goods. The artist moved to Europe in 2003 and currently lives and works in Düsseldorf.

His work was the subject of solo exhibitions at the Kunsthalle, Basel (2006) and the Neuer Aachener Kunstverein (2007). His work was exhibited in the Arsenale as part of the 51st Venice Biennale and the Biennale of Sydney and the São Paulo Biennial, both in 2006.  His work was the subject of a critically acclaimed exhibition of new work, “Losing You Tonight,” at the Museum für Gegenwartskunst, Siegen (2009) and in 2010 two installations were included in “The New Décor” at the Hayward Gallery, London.