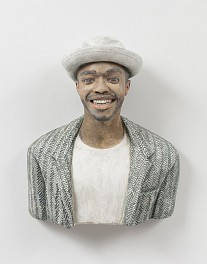 Ahearn was a founding member of Collaborative Projects, Inc. and co-organizer of the “Times Square Show” (1980).  John Ahearn’s work alongside that of his long-time collaborator, Rigoberto Torres was the subject of a survey exhibition, “South Bronx Hall of Fame,” organized by the Contemporary Arts Center, Houston in 1991, which traveled to museums in Europe and North America. In the 1980s and 1990s the artists executed several outdoor murals in the Bronx, New York and collaborated on public projects and exhibitions in Europe and North America.

Between 2000 and 2002 John Ahearn completed a public project in Pan Chiao, Taiwan and between 2005 and 2006, Ahearn and Torres collaborated on two large scale wall murals at the Inhotim Centro de Arte Contemporânea in Brazil. In the fall of 2010, their work was the subject of a solo exhibition at the Aljira Center for Contemporary Art in Newark. In May 2012, John Ahearn participated in the special projects section of the Frieze Art Fair on Randall’s Island, where he presented a reconstruction of his legendary 1979 exhibition at Fashion Moda, “South Bronx Hall of Fame.”

The artist has been the subject of solo exhibitions at Alexander and Bonin (2017), Arthur Roger Gallery, New Orleans (2020) and Charlie James Gallery, Los Angeles (2020-21).

On October 26, 2022, “Swagger and Tenderness: The South Bronx Portraits by John Ahearn and Rigoberto Torres” opened at The Bronx Museum of the Arts.