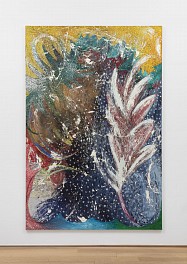 Michael Buthe’s work was widely exhibited throughout Germany from 1968 until his death in 1994.  His work was included in the legendary exhibition “When Attitudes Become Form: Live in Your Head” at Kunsthalle Bern as well as four “Documenta” exhibitions. Beginning in 1971, Buthe divided his time between native Germany and North Africa, with stopovers in Spain. These experiences, melded with his European upbringing and the zeitgeist embraced by his contemporaries Sigmar Polke and Gerhard Richter, led to the development of Buthe’s distinct and constantly evolving vernacular. With little separation between his Shamanistic lifestyle and the work he produced, there exists a seamless shift from medium to medium. Over the course of his prolific but truncated career, Buthe produced drawings, paintings, and sculptures that transcended their postwar German context.

From extravagant exhibitions, including the 1973 “Les Dieux de Babylon,” to collaborative video projects (such as “Phantomas Phantastico,” 1979); the evolution of Buthe’s diverse body of work reveals his deep interest in the juxtaposition and dehierarchization of his artistic references and obsessions. The heteroclite subjects he favored in his work included his fascination with mysticism, cosmogony, and the literature and culture of the everyday. This matrix of eclectic source material and inspiration also included the artist’s trove of personal experiences. From Buthe’s paintings emerge a universe that is exuberant and dreamlike, extravagant and profane. His habitual use of gold breathes something precious into this cosmos, intimating a transcultural, visually captivating, and mentally stimulating voyage.

Buthe’s work has come under re-examination in the past few years. In 2009 “Michael Buthe: The Angel and His Shadow” was presented at Ernst Barlach Haus, Hamburg and at the Arp-Museum Banhof, Rolandseck. Approximately twenty works by Buthe were exhibited in “Intense Proximity,” the 2012 Paris Triennale. Alexander and Bonin presented solo exhibitions of Buthe’s work in New York in 2007, 2010, and 2013. In 2015-16, the Kunstmuseum Luzern, S.M.A.K., Gent, and Haus der Kunst, Munich presented a major retrospective of Buthe’s work, including the only two extant major installations. In 2020, Buthe’s work was the subject of two concurrent exhibitions at S2 in London and at Alexander and Bonin.