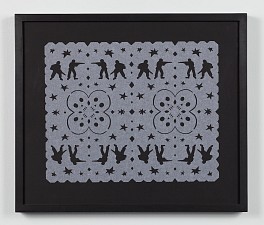 Mona Hatoum was born into a Palestinian family in Beirut and has lived and worked in London since 1975. From 1980 – 89 performance and video predominated her work.  She began to exhibit installations and objects in 1989 and her work has been the subject of numerous one-person museum exhibitions in Europe, North America, Asia and Australia.

The largest survey of her work to be shown in the Arab world was held at Mathaf: Arab Museum of Modern Art, Doha (2014). Hatoum’s first solo museum exhibition in South America was at the Pinacoteca do Estado de São Paulo and traveled to Fundación PROA, Buenos Aires (2014-2015). This was followed by a major survey exhibition organized by Centre Pompidou, Paris which travelled to the Tate Modern in London and the Kiasma Museum of Contemporary Art, Helsinki in 2016. Hatoum was the recipient of the 10th Hiroshima Art Prize, a solo exhibition of her work was held at the Hiroshima City Museum of Contemporary Art in 2017.

In 2018, Mona Hatoum: Terra Infirma, the first major solo exhibition in the United States in more than twenty years was presented at both the Menil Collection in Houston and the Pulitzer Arts Foundation in St. Louis.