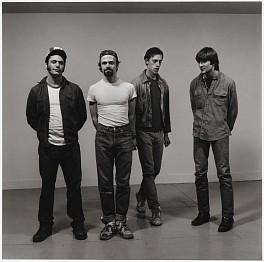 Hujar was a leading figure in the group of artists, musicians, writers, and performers at the forefront of the cultural scene in downtown New York in the 1970s and early 80s, and he was enormously admired for his uncompromising attitude towards work and life. He was a consummate technician, and his portraits of people, animals, and landscapes, with their exquisite black-and-white tonalities, were extremely influential. Highly emotional yet stripped of excess, Hujar's photographs are always beautiful, although rarely in a conventional way. His extraordinary first book, Portraits in Life and Death, with an introduction by Susan Sontag, was published in 1976.  Hujar died in 1987, leaving behind a complex and profound body of photographs which have since been exhibited around the world, including one-person shows at the Grey Art Gallery, New York; the Stedelijk Museum, Amsterdam; the Fotomuseum Winterthur, Switzerland; the Institute of Contemporary Arts, London; and P.S.1 Contemporary Art Center, New York.  His images of Paul Thek in his studio, taken in 1967 were exhibited as a slide projection in “Paul Thek: Diver”, at the Whitney Museum of American Art and printed by Gary Schneider, at Alexander and Bonin.