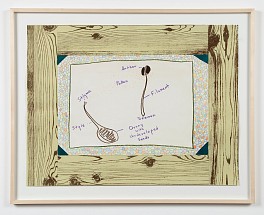 Ree Morton (b. 1936, Ossining, New York) exhibited during her lifetime at Artists Space, New York; the Institute of Contemporary Art, Philadelphia; the Whitney Museum of American Art, New York; as well as Bykert and Droll/Kolbert Galleries. Morton died in a car accident in Chicago in 1977.

Her works are included in numerous museum collections in the United States and Europe. A posthumous retrospective of her work was organized by the New Museum, New York in 1980 and traveled to several U.S. museums. In 1999, the University of Vermont, Burlington organized an exhibition of her sketchbooks and published a facsimile of selected pages. A survey exhibition and an extensive monograph of Morton’s work was organized by the Generali Foundation, Vienna in 2008 and an exhibition of her drawings and related paintings and sculpture was presented at the Drawing Center, New York in 2009.

In 2015, her work was the subject of a survey at the The Museo Nacional Centro de Arte Reina Sofía, Madrid. In the Fall of 2016, Alexander and Bonin held a solo exhibition of her work. In September 2018, the Institute of Contemporary Art, University of Pennsylvania, will hold the first major solo museum exhibition of Ree Morton’s work in the United States in over thirty-five years.