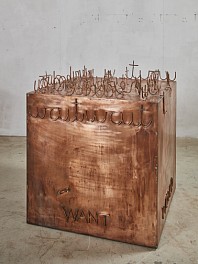 Between 1968 and 1981, he exhibited in galleries and institutions such as the San Francisco Museum of Art; the de Young Museum, San Francisco; the Smithsonian Institution, Washington D.C. and the 1968 “Sculpture Annual” at the Whitney Museum, New York.  Between 1975 and 2004, Kinmont studied Buddhism and worked as a carpenter, returning to his artistic practice in 2005.

One-person exhibitions of his sculpture and photography took place at Alexander and Bonin in 2009 and 2011, and in 2010 his work was included in several group exhibitions such as “The Traveling Show” at Fundación/Colección Jumex, Mexico City, and “The Moon is An Arrant Thief” at the David Roberts Foundation, London. In 2013, the artist’s work was included in “Plans for Escape: An Exhibition under Construction,” at the Centro Cultural Banco do Brasil in Sao Paulo.

In 2011, Kinmont’s work was included in “State of Mind,” a survey of new California art circa 1970 co-organized by the University of California, Berkeley Art Museum and the Orange County Museum of Art. In 2012 his work was included in “Ends of the Earth: Art of the Land to 1974,” at the Geffen Contemporary at the Museum of Contemporary Art, Los Angeles; the exhibition subsequently traveled to Haus der Kunst, Munich.

Alexander and Bonin presented a solo exhibition of new sculpture, “trying to return home educated” in 2014. The following year, Kinmont had two solo exhibitions; “Jump” at RaebervonStenglin, Zurich and “Robert Kinmont: trying to understand where I grew up” at the di Rosa museum in Napa, CA.   Also in 2015, his work was included in “Afterlife”, curated by Julie Ault, at Galerie Daniel Buchholz, New York.  Kinmont’s photographic series 8 Natural Handstands,1969/2009 was included in “Sublime – The tremors of the world” at the Centre Pompidou-Metz in 2016. That same year, his work was included in “Full Moon,” the inaugural exhibition at Museum Voorlinden in Wassenaar, The Netherlands.

A solo exhibition of Robert Kinmont’s new sculpture took place at Alexander and Bonin in 2017.