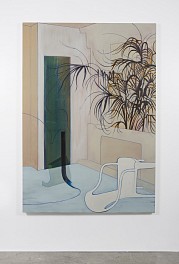 Roman Cochet was born in Paris, France in 1987 and currently lives and works in New York. He received a BFA at Central Saint Martins in London in 2011 and an MFA from Hunter College, City University of New York in 2015.

In his most recent work, Cochet uses painting, drawing, and sculpture to imagine a world without humanity. Cochet is chiefly concerned with this absence and the exploration of contingent realities where only the traces of humanity are evident. His investigation into the posthuman is led by a series of adroitly executed canvases, which often depict empty chairs, umbrellas, plastic detritus, and domestic scenes in unnervingly tranquil compositions.

In 2019, Roman Cochet’s first solo show, A dog named Robòt, opened at Alexander and Bonin. Most recently, Cochet had a solo exhibition at the French Institute Alliance Française in New York in 2021.