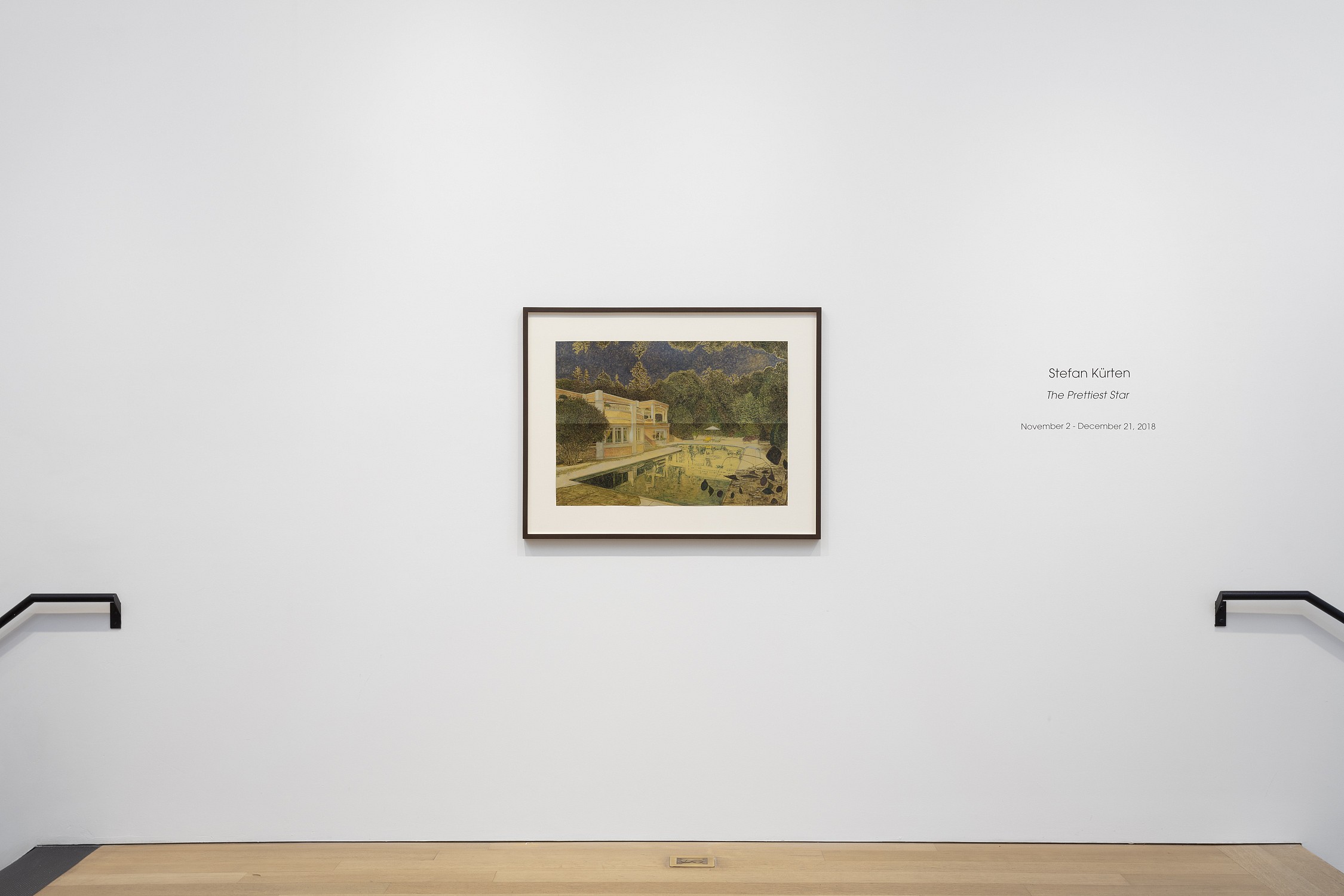 An exhibition of recent works by Stefan Kürten will open at Alexander and Bonin on November 2nd, 2018. Central to the exhibition is Perfect World (2016-17), one of Kürten’s largest and most detailed paintings. Painted over a two-year period, Perfect World is an all-encompassing work that initially recalls the repeated patterns of wallpaper designs such as those of William Morris. Closer inspection reveals numerous potent symbols of church and state, war and peace, surveillance and negligence, mysticism and capitalism camouflaged amongst enormous flowering tendrils. The leaves of the tendrils transform into words such as good, evil, money, selection, world bank, coca cola, hunger, and infinity. Perfect World has been exhibited in Düsseldorf and San Francisco.

Kürten is known for his paintings of unpopulated homes which, although fictional, elicit a feeling of familiarity and déjà vu. The Prettiest Star will include several works which portray modernist style homes and their furnishings including representations of iconic art forms such as mobiles, abstract expressionist paintings, and outdoor bronze sculptures. The houses’ modern designs often extend to their manicured gardens, which are in turn framed by lush, untamed vegetation. Kürten’s highly detailed painting style evokes idioms of painting movements as diverse as Pointillism, Northern Romanticism, and Abstract Expressionism.

Stefan Kürten is a painter and guitarist. His musical projects have included touring in the late 1990s with his first band ‘Superbilk’. He is currently a member of the trio ‘Elena Farr’ and has worked on musical productions with Kurt Dahlke, Stoya Summer, and Hauschka. His paintings are in the permanent collections of several European and American institutions including Kunstmuseen Krefeld, The Montreal Museum of Fine Arts, The Museum of Modern Art, New York, and the San Francisco Museum of Modern Art.

Shadowplay, an evening of live music from Düsseldorf and New York featuring Stefan Kürten, Salvador Dali’s Garden Party, and Dirt Bikes will be held in the exhibition space on Tuesday, November 6th.