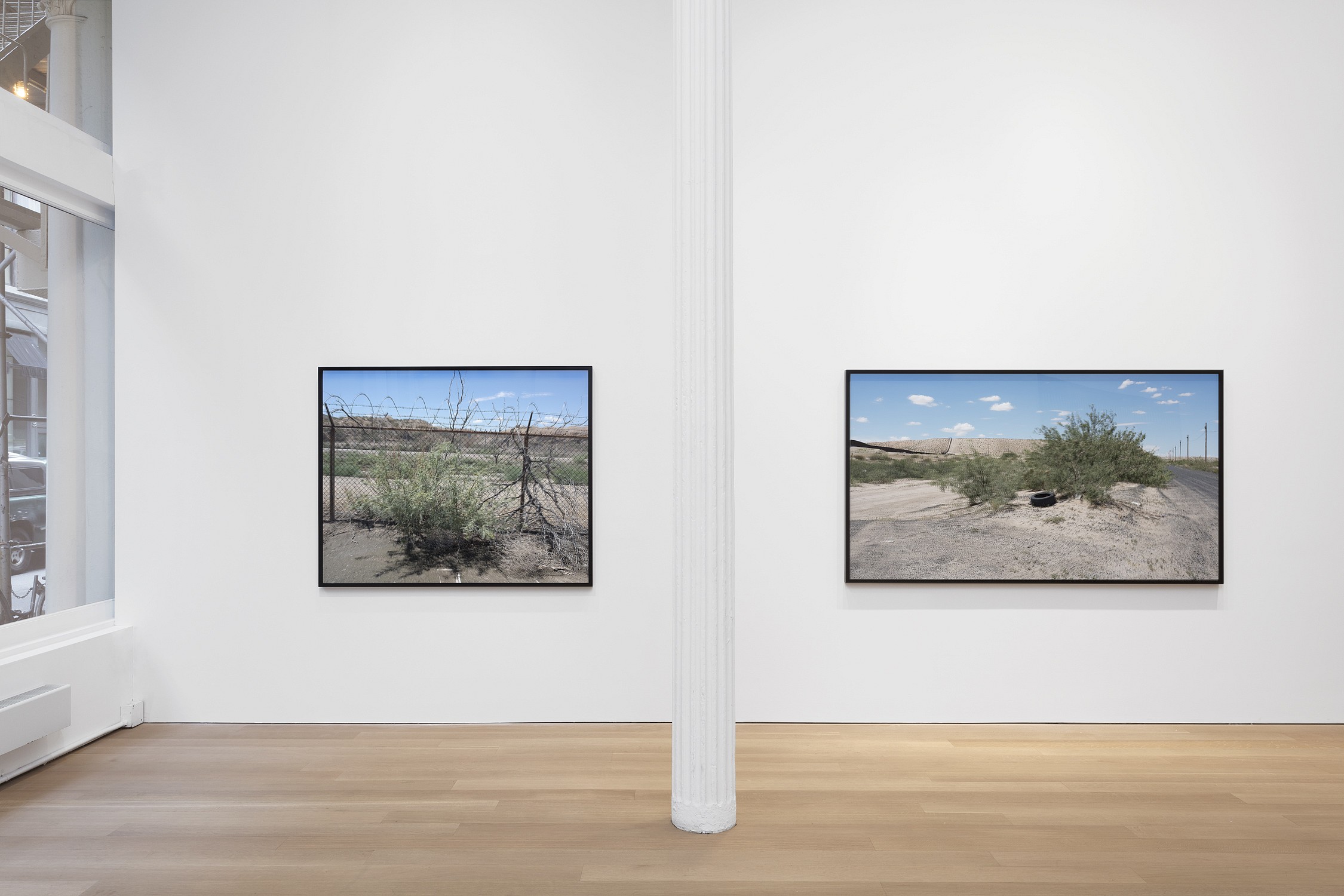 Alexander and Bonin is pleased to announce the opening of a three artist exhibition including works by Willie Doherty, Mona Hatoum, and Rita McBride on Friday, November 10, 2017.

Willie Doherty will present recent photographic and video works made along the US-Mexico border and on the outskirts of Pittsburgh. As with much of Doherty’s earlier work made at the contested Irish border, the images taken near El Paso and their titles allude to situations beyond what is visible in the photograph; to precarious conditions, uncertainty, and an escalating erosion of tolerance in the negotiation of frontiers and national boundaries. Doherty’s works investigate the margins of the border where structures become the points of tension, where the illusion of control is enforced, and the false certainties of security and strength are instrumentalized and reinforced.

Doherty’s No Return (2017), a single channel projection, will be installed in the video gallery. No Return was shot in an area once known as the “cradle of Western Pennsylvania’s steel industry,” before suffering from its collapse in the 1980s. While the work engages with the landscape as it looks today, it also approaches it as both a repository for the memories of past experiences and a witness to the ravages of socio-economic change and ecological degradation. Photographs taken in the same location will also be on view. Presenting the town’s derelict buildings and decaying urban landscape, the images are suffused with a sense of unease that echoes the site’s past social, economic, and ecological anxieties.

Mona Hatoum’s SP Atelier, an installation of drawings, embroideries, objects, and photographs gathered during a residency in Sao Paulo, provides a rare window on the artist’s process. The work includes samples of materials and drawings of art works proposed for her solo exhibition at Pinacoteca do Estado de São Paulo, Brazil. SP Atelier shows the significance of travel and exploration in Hatoum’s practice, and her interest in creating work outside of a fixed, permanent location. ‘I like to work in different contexts and often, when I am invited to show my work abroad, I like to spend a lot of time in that location, making work with local materials, fabricators, and craftspeople.’

Also included in the exhibition is the recent work Untitled (wall cabinet) II, 2017, containing ambiguous and sensual glass forms, which despite being solid, appear to remain in a molten state. A solo museum exhibition of Hatoum’s work, Terra Infirma, is on view at the Menil Collection through February 25th and will travel to the Pulitzer Foundation, St. Louis in April, 2018. Terra Infirma brings together a group of major sculptures and installations from American and European collections.

Rita McBride’s new work, Guide Rails with Hubcaps, takes the form of white-washed split rail fencing in modular units which direct the viewer’s eye to a cinematic tableau of six vintage hubcaps. A synergy is created by pairing these recognizable forms outside of their expected context, and exemplifies McBride’s practice of changing or subverting an object’s connotations.

Explorer, McBride’s survey exhibition currently on view at WIELS in Brussels, includes an installation of Guide Rails which spans all three floors of the space and engages in a dialogue with the building’s architecture and a selection of works from 1992 to the present. A new commission by McBride, Particulates (2017), recently opened at Dia:Chelsea and is on view through June, 2018. Particulates is inspired by time travel, the principles of light and space, and quantum physics. The materials of McBride’s Particulates include water molecules, surfactant compounds, and the beams of high-intensity lasers.