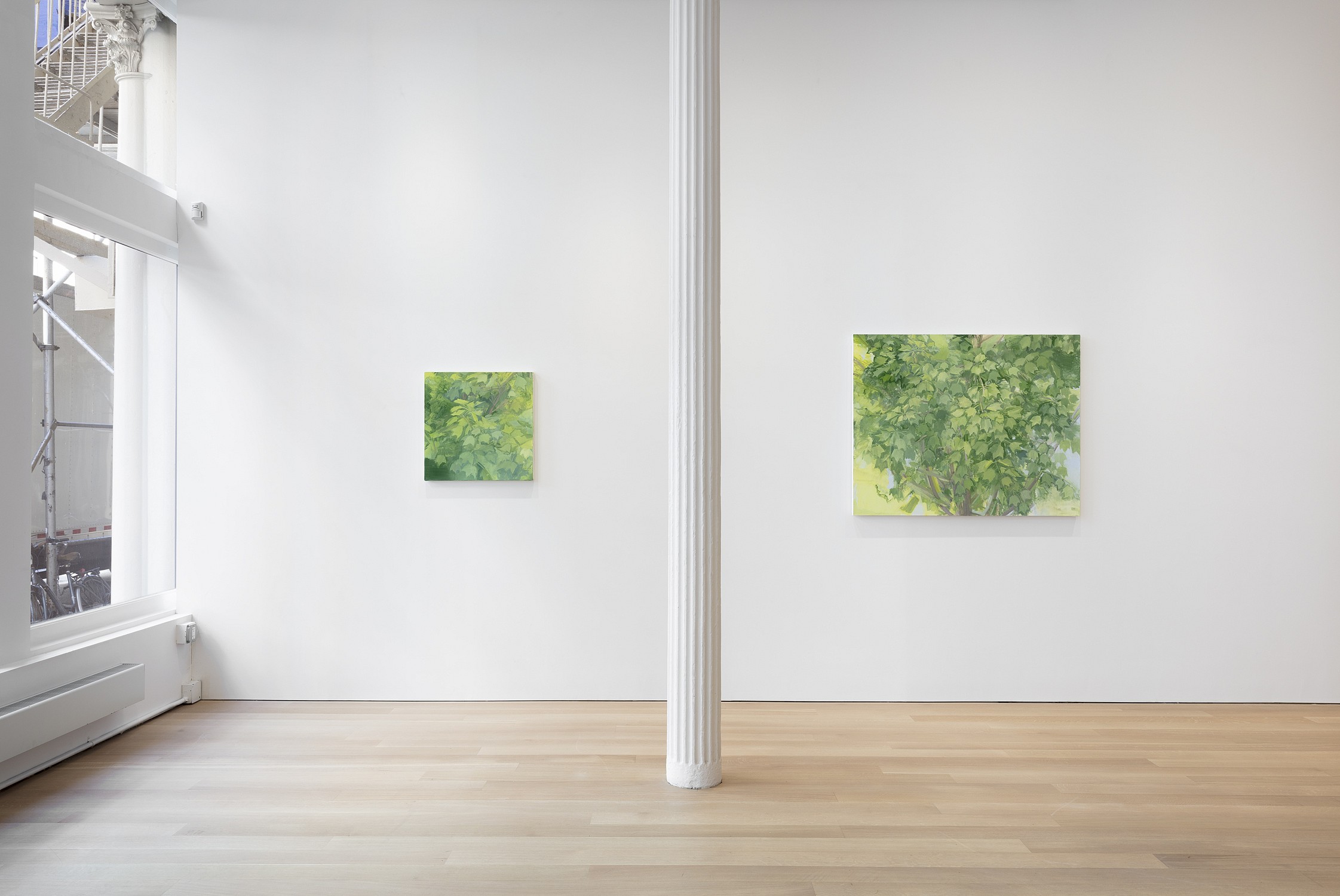 Alexander and Bonin is pleased to announce the opening of three solo exhibitions of works by Sylvia Plimack Mangold, Robert Kinmont, and Willie Doherty on Tuesday, May 2, 2017 with an opening reception on Friday, May 5 from 5 – 7pm.

Summer and Winter, an exhibition of recent paintings, drawings and watercolors by Sylvia Plimack Mangold will be presented in the main gallery. Beginning in the late 1970s, Plimack Mangold focused her attention on the landscape around her property in Washingtonville, New York and eventually to individual trees. Working from direct observation, Plimack Mangold has painted the maple tree outside her studio window in the summer and winter over successive years. Repeatedly exploring the same viewpoints of the upper portions of the tree provides the viewer with the opportunity to experience the changes within the planes of leaves. Viewing a room of summer or winter paintings emphasizes a less pictorial view – the leaves, or the sky between branches, become areas of pure paint as one analyzes how Plimack Mangold constructs her paintings. A selection of works on paper by Plimack Mangold will also be on view as part of Elements of XXX, a three artist exhibition at 47 Canal, New York. Concurrent to the opening of Sylvia Plimack Mangold’s exhibition at Alexander and Bonin on May 5th will be the opening of Robert Mangold’s exhibition at PACE (510 West 25th Street) from 6 to 8pm.

Want, an exhibition of new sculpture by Robert Kinmont, will be on view on the lower level. Kinmont grew up in the desert near Bishop, CA and has lived most of his adult life in northern California. These rural environments have provided the practical and conceptual foundation for his work, exemplified by his recurrent use of commonplace and natural materials such as wood, pine, and dirt. Kinmont uses these modest materials to explore the relationship between the environment and his own body and life. In his latest work, copper serves as the primary medium, a material Kinmont describes as “warm and friendly” and “malleable in a way that is physical and approachable for the viewer.” Additionally, several works incorporate cursive scripts, the contents of which introduce family and domestic themes. The first Bay Area retrospective of his work, Robert Kinmont: Trying to understand where I grew up, was presented at di Rosa, Napa in 2015.

Willie Doherty’s No Return (2017), a single channel projection, will be installed in the video gallery. No Return was shot in Braddock, a town once known as the “cradle of Western Pennsylvania’s steel industry,” before suffering from its collapse in the 1980s. While the work engages with the landscape as it looks today, it also approaches it as both a repository for the memories of past experiences and a witness to the ravages of socio-economic change. In looking at the present, No Return visualizes our shared apprehension about the future.

Doherty’s approach and process is speculative. Often taking an existing image or other information as a starting point, he then proceeds to see what can be discovered or found in a location. No Return extends Doherty’s interest in the relationship between landscape and memory and working in locations that bear the traces of contested histories and narratives; some forgotten, some half remembered. The work was commissioned by the Mattress Factory, Pittsburgh for their exhibition so it is which opens on April 7, 2017.