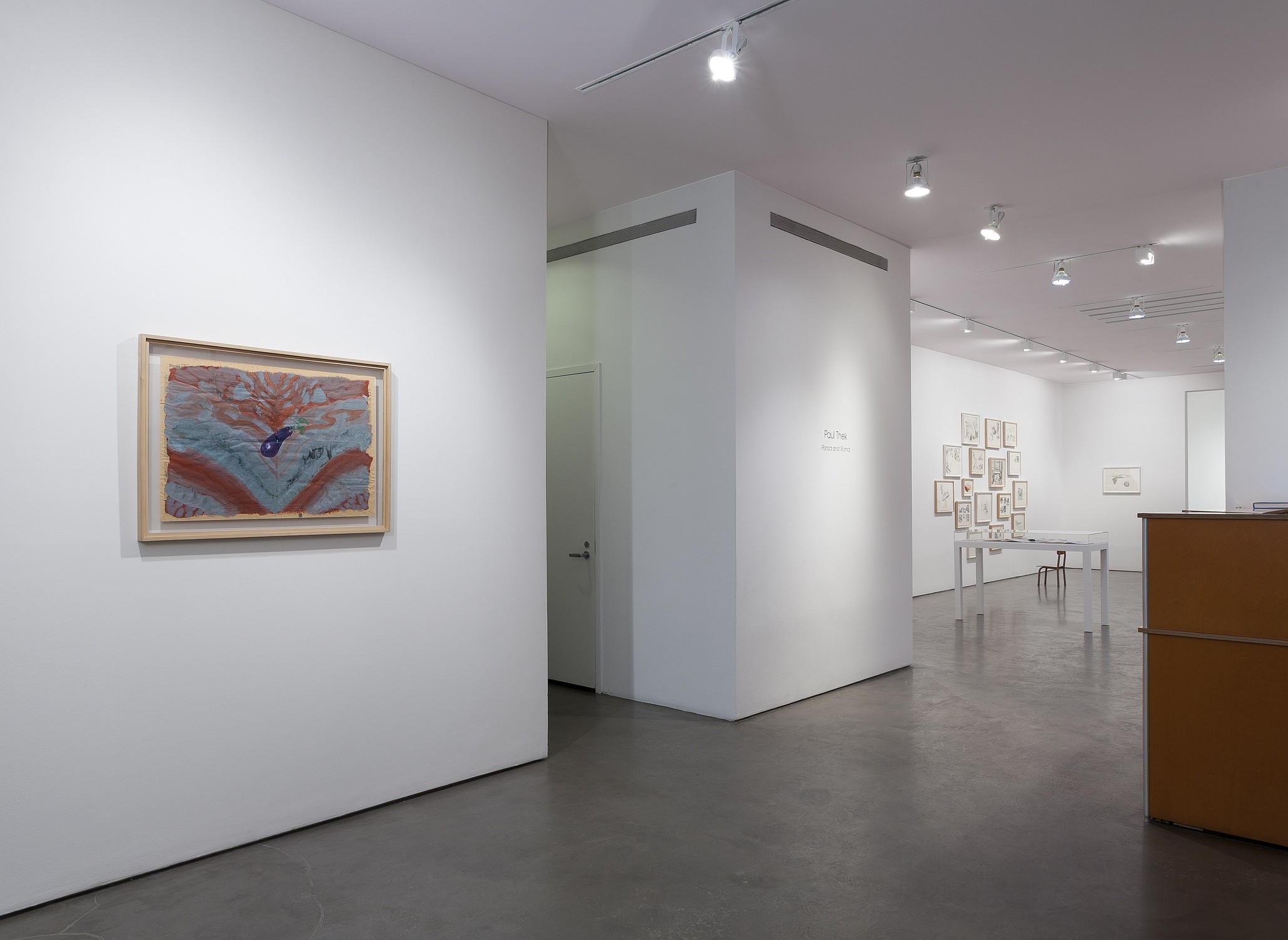 Paul Thek: Ponza and Roma is the first exhibition to examine the paintings and drawings Thek made in Italy during the 1970s. Following three sensational exhibitions of his wax meat pieces and the lost legendary installation The Tomb at New York's Stable and Pace Galleries in the 1960s, Thek spent a significant part of the 1970s in Europe. While there he created a series of large scale collaborative installations constructed from transitory materials such as sand, newspaper and trees. These installations were exhibited at the Stedelijk Museum, Amsterdam; the Moderna Museet, Stockholm; “Documenta V,” Kassel; the Kunstmuseum Lucerne and Wilhelm-Lehmbruck-Museum der Stadt Duisburg. Concurrently, Thek worked on the Mediterranean island of Ponza and in a flat in Trastevere, having first visited Ponza in 1968.

On Ponza, Thek captured the dramatic landscape of the island in traditional media of pencil, watercolor and oil paint. In Rome, he executed numerous paintings on spreads of the International Herald Tribune. A large number of these newspaper paintings were shown at Iolas Gallery in Paris in 1975. These works include images of Ponza, the sea, an eggplant, and a grape trellis as well as enigmatic personae such as a hot potato with arms and legs, and figures with globes or a valentine shaped heart for a head. Many of these images, and the Ponza motifs, are noted or sketched in Thek's notebooks, a selection of which is included in Paul Thek: Ponza and Roma. Ponza was a special place for Thek, a creative and spiritual haven. In his notebooks, he writes of the perfection of the work he made on Ponza and, referring to himself in the third person, “he couldn’t live without the special sweetness and purity of Ponza”. Three Roman notebooks in which Thek transcribed The Confessions of St. Augustine, punctuated by black and white Polaroids of clouds, are included in the exhibition as are selected correspondence and archival materials from the time.

Paul Thek was born in Brooklyn in 1933. He studied at the Art Students League and Pratt Institute in the early 1950s. In the mid-1960s, he produced a well-known body of work, The Technological Reliquaries: wax sculptures which looked like raw meat or human limbs encased in Plexiglas vitrines. Large-scale, full-body casts followed, sometimes set into specific environments. Thek’s work is included in numerous American and European museum collections with particularly strong representation of his drawings at the Museum of Modern Art, New York and the Philadelphia Museum of Art. In 2010-2011, “Diver,” a retrospective of his work curated by Elisabeth Sussman and Lynn Zelevansky was presented at the Whitney Museum of American Art, New York, the Carnegie Museum of Art, Pittsburgh and the Hammer Museum, Los Angeles. Beginning February 6, the Museum Boijmans Van Beuningen in Rotterdam will have a presentation of the works and letters of Paul Thek which came into their collection in 1994 through the bequest of Franz Deckwitz, a longtime friend and collaborator. A Boijmans Study will accompany the presentation. Paul Thek: Ponza and Roma will travel to Mai 36 Galerie, Zürich, March 20 – April 25, 2015.