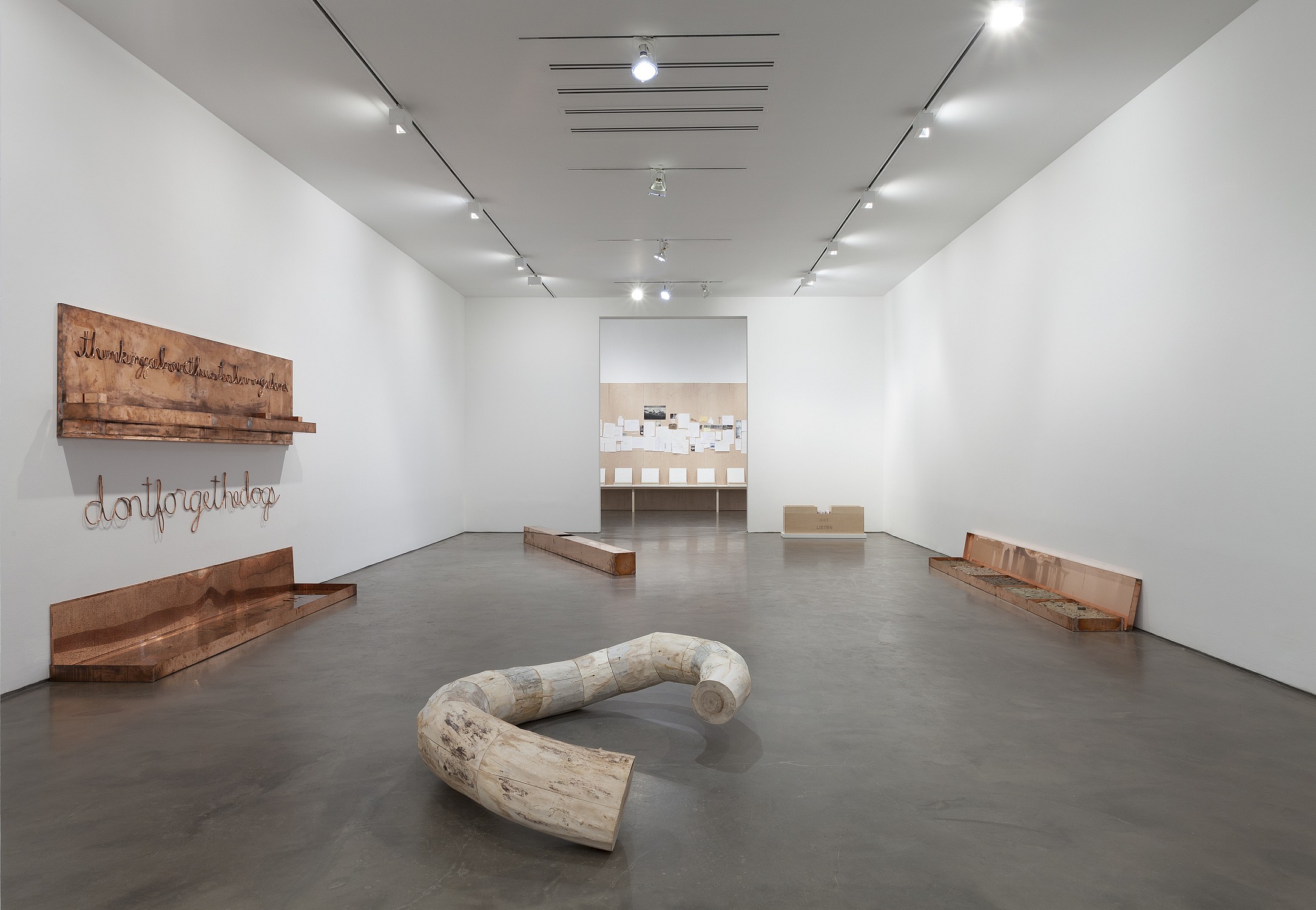 trying to return home educated, an exhibition of new sculpture by Robert Kinmont, will open at Alexander and Bonin on Saturday, April 12th. Created in 2013 and 2014, the works are made from wood, copper, and earth; several incorporate hand-written notes which have been a significant part of his practice since 2005.

The conceptual artist Robert Kinmont is primarily concerned with his environment, the Californian landscape. He works with simple, mostly natural materials, and places these in relation to his body and his life. At the beginning of the 1970s, Kinmont stopped making art and lived a rural life, raised his kids and built his own school, called Coyote. Legend has it that he taught his students about human creativity by cooking breakfast for them over a camp stove set up on the floor of their art school classroom.

In Listen, 2013 more than a hundred sketches, photographs and notes which record the artist’s thoughts and personal anecdotes of the past 5 years are displayed against a plywood background and stored in several boxes at the foreground of the sculpture. Other epistolary works include Waiting and a broken letter, 2013 in which letters are separated by category into four compartments of a wooden box.

Kinmont’s early sculpture Copper Pots (given a chance), 1972 is a group of vessels which he planted in the desert and filled with water with the hope of germinating dormant seeds and at the same time marking his path to them with the least possible scarring of the landscape. This exhibition marks his return to the use of copper, a material which provides him with both malleable and hard-edged forms. Five Dirt Roads, 2014 takes the form of a five compartment tray each of which has been filled with a different textured dirt; Wait, 2013, a 120 x 7 x 7 in. container is filled with 28 willow branches visible through a small ‘window’ cut into the copper. The titles of two works from 2014, The inability to form or retain new ideas, and Life is full of water and mistakes are spelled out in copper tubing, representing both a period of self-reflection in the artist’s life and a physical manifestation of the ideas and thoughts recorded in Listen.

Robert Kinmont received his education at the San Francisco Fine Arts Institute and the University of California at Davis. In recent years, his work has been included in exhibitions such as “The Traveling Show” at Fundación/Colección Jumex, Mexico (2010); “State of Mind,” organized by the University of California, Berkeley Art Museum and the Orange County Museum of Art (2011); “Ends of the Earth: Art of the Land to 1974,” at the Geffen Contemporary at the Museum of Contemporary Art, Los Angeles and the Haus der Kunst, Munich (2011). In 2013 his work was the subject of one-person exhibitions at the Küenstlerhaus Bremen and the Kunsthaus, Glarus. Currently, his 1972 sculpture, The wings are in the paper drawer is part of Julie Ault’s curated section: Afterlife: A Constellation, at the Whitney Biennial 2014, Whitney Museum of American Art, New York