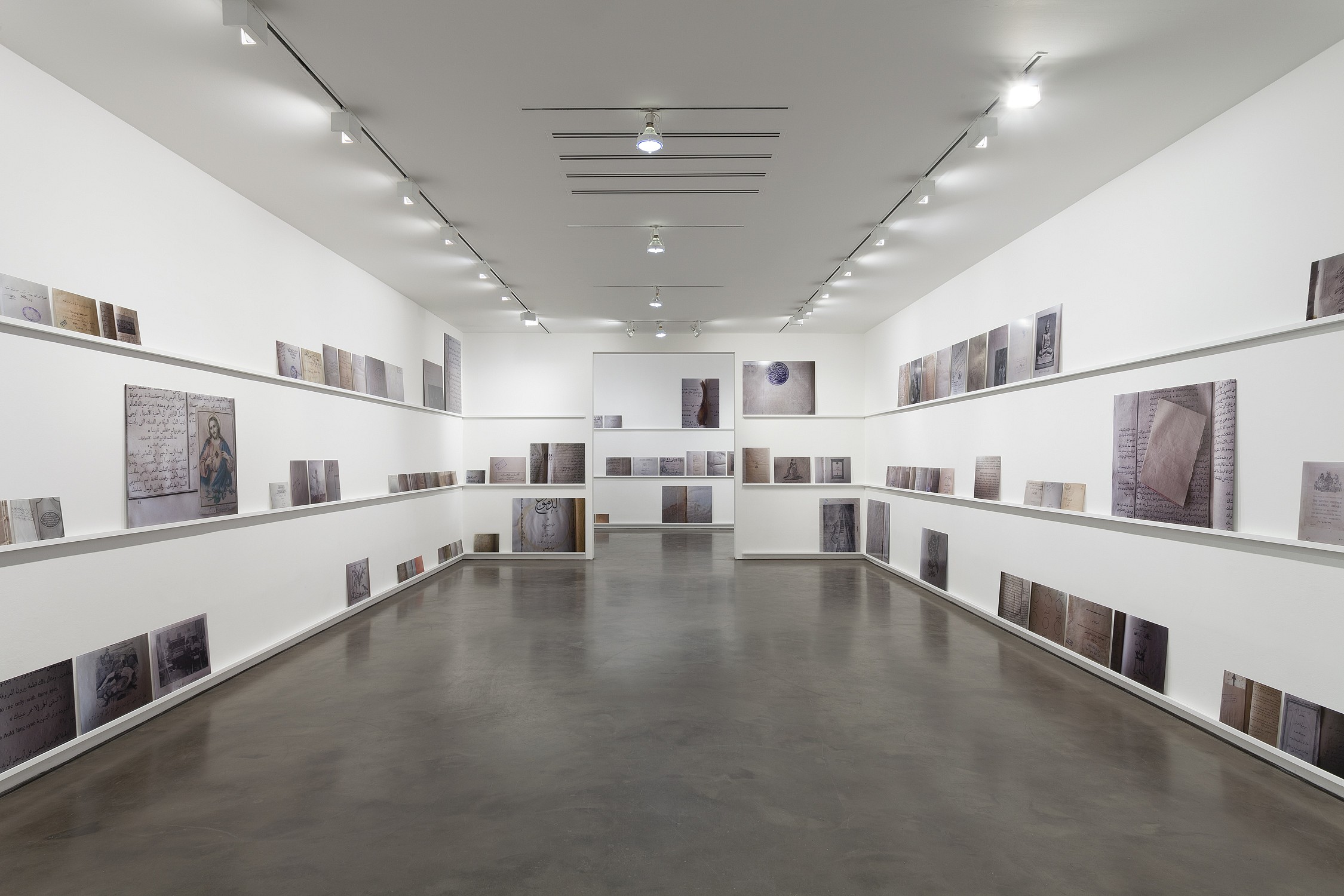 Emily Jacir’s intervals will open on March 1 at Alexander and Bonin. The exhibition features works from 1998 – 2012 which are being exhibited for the first time in the USA. This is Jacir’s first solo exhibition in New York since her 2009 presentation of Material for a Film at the Solomon R. Guggenheim Museum and Lydda Airport at the gallery. Emily Jacir’s ongoing practice is concerned with silenced historical narratives, resistance, movement, and exchange. Books, libraries and the act of translation recur in many of her projects. The exhibition includes a film installation, photographs, drawings, sculptures and a public mural.

The installation ex libris, 2010 – 2012, commissioned and produced by dOCUMENTA (13), will occupy the first floor of the gallery. ex libris commemorates the approximately thirty thousand books from Palestinian homes, libraries, and institutions that were looted by Israeli authorities in 1948. Six thousand of these books are kept and catalogued at the Jewish National and University Library in Jerusalem under the designation “A.P.” (Abandoned Property). Jacir photographed these books with her cell phone during repeated visits to the library over the course of two years. Jacir’s explorations and her subsequent selection of specific images create an intimate register of fragments and traces. Her work not only addresses the looting and destruction of books but also raises questions regarding repatriation and restitution. For dOCUMENTA (13), she also translated selections of the handwritten inscriptions from the books into German and English and exhibited them on billboards throughout Kassel. On the exterior of the Zwehrenturm, one of the inscriptions was presented in each language on three sides of the tower. Additional inscriptions were presented on billboards sited at the Hauptbahnhof and Murhard Library. For the New York presentation of ex libris, one of the inscriptions will be painted on a 25 x 50 foot wall near the gallery.

The exhibition will also include the video installation ENTRY DENIED (a concert in Jerusalem), 2003 a full length concert performed by Austrian nationals Marwan Abado, Peter Rosmanith, and Franz Hautzinger. The musicians were slated to give concerts in East Jerusalem and Bethlehem in July of 2002 as part of the Songs of Freedom concert series, organized by Yabous Productions. They were unable to perform after Marwan Abado was denied entry at Tel Aviv’s Ben Gurion airport for “security reasons” on July 20th, 2002. Jacir asked them to perform the concert, exactly as it was to have taken place in Jerusalem, in an empty theater in Vienna without an audience.

On the gallery’s second floor there will be a selection of works made by Jacir in Paris in 1998 which include drawings, photographs, documentation of a performance, and a sculpture. These small scale works and sketches reflect Jacir’s various trajectories.

In conjunction with Documentary Fortnight, Emily Jacir’s two-channel video work Ramallah/New York (2004- 2005), from the permanent collection of the Museum of Modern Art will be on view at in the museum’s Ronald S. and Jo Carole Lauder Building Lobby. In November, 2014, Darat al Funun in Amman will present a survey of Jacir’s work which concentrates on her film and sound installations, billboards and interventions.