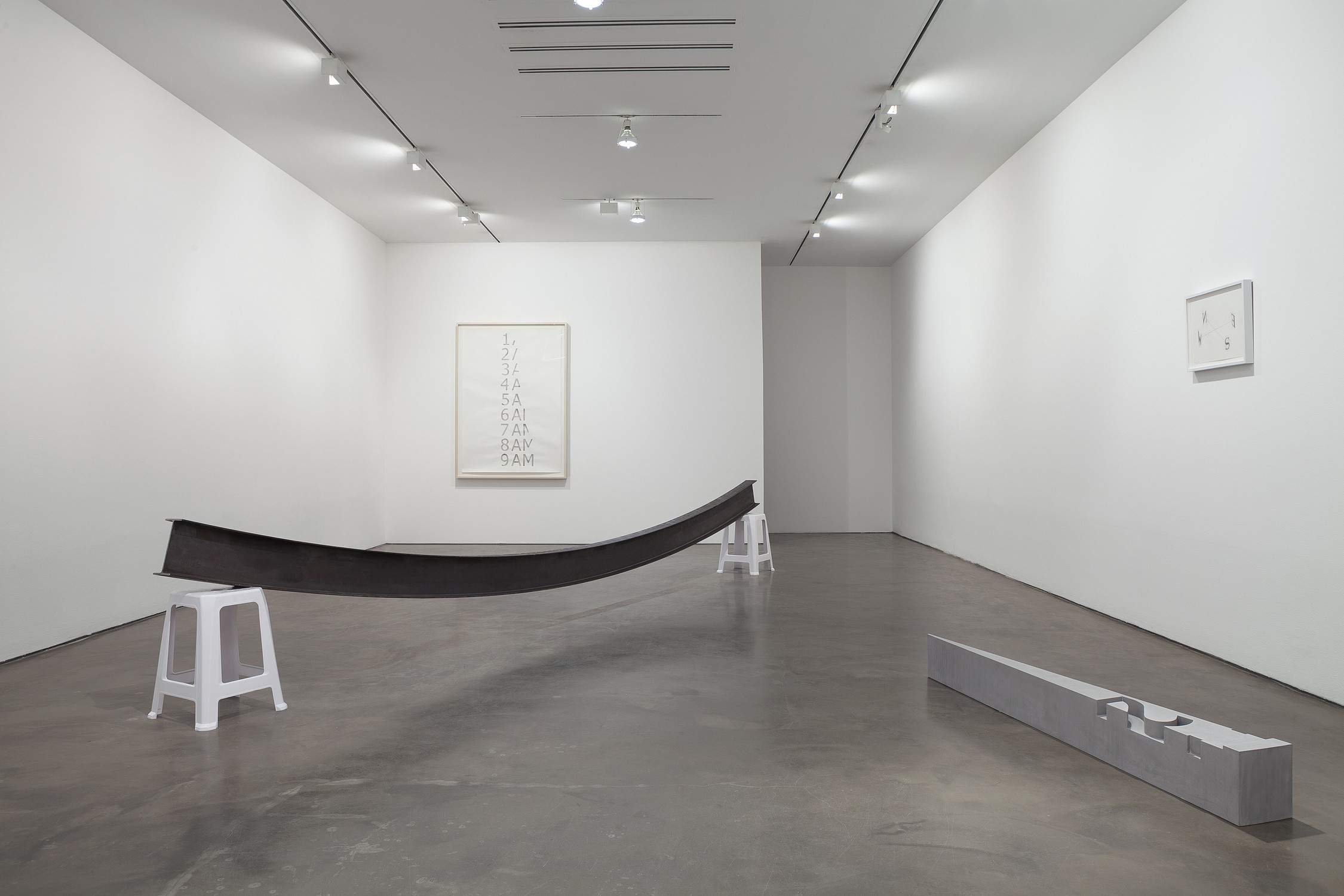 Alexander and Bonin is pleased to announce Loop, the first one person exhibition by Jorge Macchi in New York.

For this exhibition Macchi will divide the gallery into three spaces. Each space will contain works which manifest the measure of time and reiterate its extension in space through a series of projections, objects and watercolors. Jorge Macchi’s finely tuned vocabulary results in works which are simultaneously poetic and uncanny.

Time stands still in a number of Macchi’s recent works. Pendulum, 2013 a curved I-beam supported by two plastic stools, appears to buckle under its own weight. As the title suggests, this tensile irregularity also demarcates the path of a pendulum’s swing, as if to solidify the infinite number of repetitive momentary positions of its arc. First Second, 2013 employs a similar logic, capturing a moment in a material. Macchi has cast the narrow wedge between the hour marking twelve and the tick of the first second on a clock’s face in concrete. This cast triangle renders space-time solid while at the same time leaving open the possibility of development, like a step on a spiral staircase of simultaneity.

The video installation, XYZ, 2012 will occupy the rear space of the gallery. The image of a station clock with hands frozen is projected in such a way that the three hands rest perfectly into the seams of the corner of a darkened room. In his work Macchi fuses architecture, space and time into a simple yet unfamiliar congress.

The two-channel video projection From Here to Eternity, 2013 will be shown on the gallery’s second floor. This work is the most recent collaboration between the artist and the musician Edgardo Rudnitzky. Two clips were extracted from the classic Hollywood film: the first from the opening title sequence and the second while the words ‘THE END’ appear on the screen. The clips have slightly different lengths creating a chaotic sound mixture and are combined with a third audio channel in real time using notes from the original soundtracks and from music sung by women.

Jorge Macchi was born in 1963 in Buenos Aires where he continues to live and work. Since the mid-1980s, his work has been shown throughout the Americas and Europe. Currently, ten large-scale installation works from 2007–2013 are being shown in ‘Container’ a one-person exhibition at the Kunstmuseum, Lucerne. In 2011, his work was the subject of a survey exhibition, ‘Music Stands Still’ at the Museum of Contemporary Art (SMAK) in Ghent. His work was represented in the 11th Biennale de Lyon (2011); the 12th Istanbul Biennial (2011); ‘All of this and nothing’, Hammer Museum, Los Angeles (2010); ‘Brave New Worlds’ at the Walker Art Center (2007). In 2005, Jorge Macchi, in collaboration with Edgardo Rudnitzky, represented Argentina at the Venice Biennale. His installation for the 2012 Liverpool Biennial, Refraction will be exhibited in June in the Art Unlimited section of Art Basel.