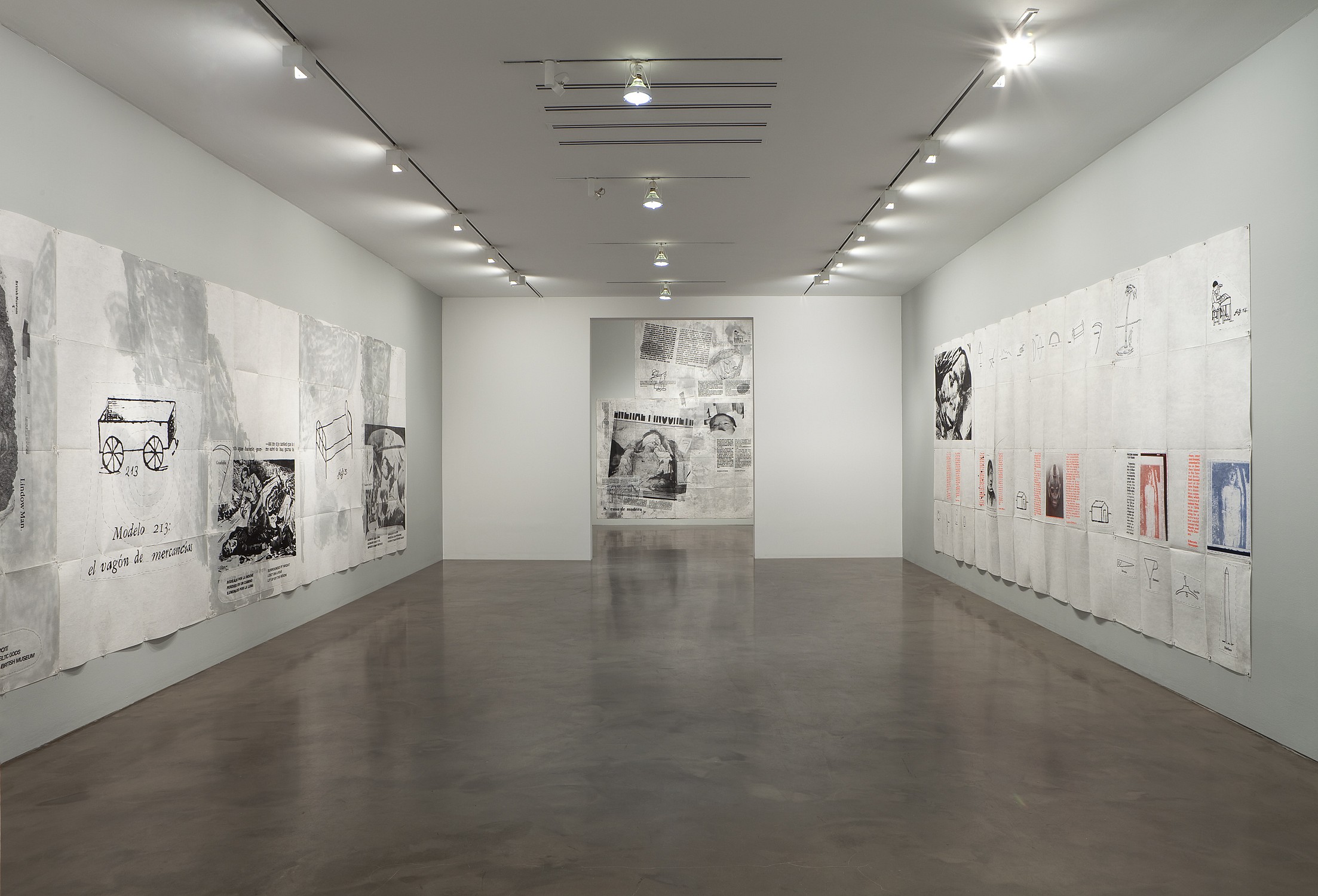 An exhibition of 7 ‘Airmail Paintings’ by Eugenio Dittborn will open at Alexander and Bonin on Saturday, October 20th.   The works, executed between 1989 and 2011, were selected to emphasize their origin and the journeys they make as they circulate from Santiago de Chile (the artist’s home) to multiple destinations throughout the world.

Dittborn began his series of ‘Airmail Paintings’ in 1984, applying various paint, silk-screen, and collage techniques to large sheets of brown wrapping paper which were then folded, packed into envelopes and sent to his friend and fellow artist Juan Davila in Melbourne, Australia. From there, Dittborn developed a rich language of imagery which weaves themes of distance and circulation into the conditions of painting itself. Circulation, in that the works are now created on loose sections of canvas, folded, and mailed in unique envelopes which track each destination. Upon further investigation, a second level of circulation is revealed in the repetition of images across multiple works, building circuits of meaning and juxtaposing material drawn from such diverse sources as comic books, police records from the 40s, anthropological texts, and newspapers. Distance - in both the literal distance over which the works travel, and the distance across time that separates imagery from its original context - is folded and compressed into the matrix of each painting.

The ‘Airmail Painting’ was Dittborn’s inspired solution to the problems of working in Chile during the military dictatorship of Augusto Pinochet (1973-98). It was a way of disguising his artwork, bypassing bureaucracy and establishing a unique presence in the international art world. The paintings in this exhibition have been in constant circulation since their initial departure from Santiago.  The primary state of Dittborn's works is the state of transit: the significance lies not so much in the date of its production but in the dates of its multiple journeys.

Dittborn’s work has been shown internationally since the early 80s.  The first survey exhibition of his work took place in 1993 at the Witte de With Center for Contemporary Art, Rotterdam and the Institute of Contemporary Art, London.  In 1997, the New Museum of Contemporary Art in New York and the Museo Nacional de Bellas Artes in Santiago collaborated on an extensive exhibition.  His work was the subject of in a one-person exhibition at Museo De Artes Visuales (MAVI), Santiago de Chile (2010).  A survey of  Eugenio Dittborn’s multi-panel ‘Airmail Paintings’ was held at the Bienal do Mercosul in Porto Alegre in 2011 and his work was included in  “Intense Proximity”, the 2012 Paris Triennale. An early ‘Airmail Painting’ is  included in the exhibition “This Will Have Been: Art, Love, & Politics in the 1980s,” organized by the Museum of Contemporary Art, Chicago and travelling to the Walker Art Center, Minneapolis, and the Institute of Contemporary Art, Boston  in 2012-2013.  A one-person exhibition of his work will take place at the Museum Het Domein Sittard, The Netherlands in 2013.