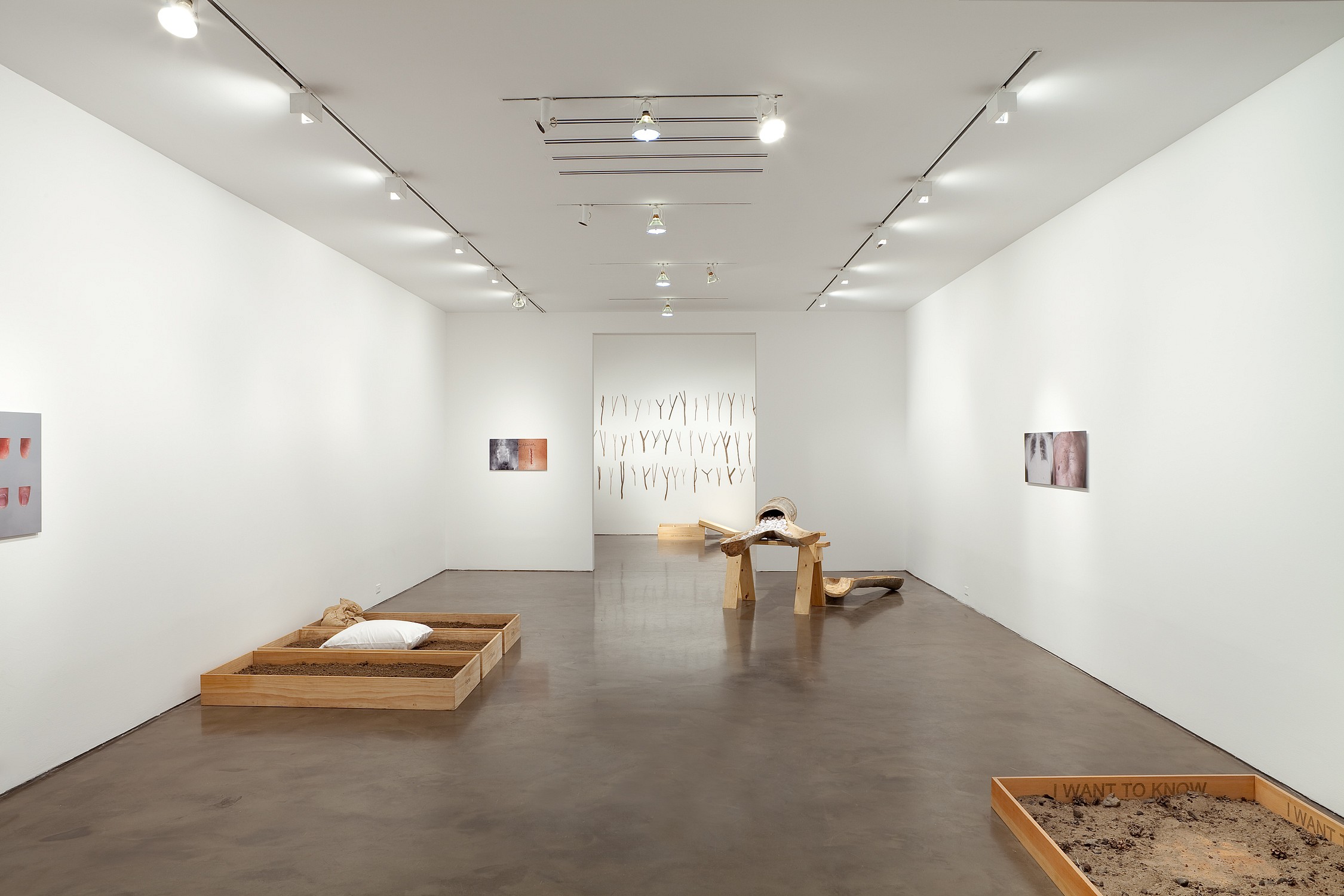 Robert Kinmont’s one-person exhibition, Evidence, will open at Alexander and Bonin on Saturday, October 22nd.  His conceptual photography and sculpture from the 60s and 70s were exhibited at this gallery in 2009, many for the first time. The forthcoming exhibition will focus on works made since 2009.

Born in Los Angeles in 1937, Kinmont grew up in the desert near Bishop, CA and has lived most of his adult life in northern California. These rural environments have come to provide the practical and conceptual underpinning of his practice. The new works continue Kinmont’s use of natural and common materials to explore enigmatic relationships, basi c to human existence.

127 Willow Forks (This is Who I Am), 2010 is comprised of three rows of forked willow branches cut to various lengths and gently attached to the wall. The forks are accompanied by a maple, pine and birch plywood case containing the surplus willow forks with the title stenciled on its side. For Kinmont these forks bring to mind a reference to one’s life as well as to the variety found in any single category in nature.

The arrangement of the forks functions as a metaphor for structure and diversity in society.  The ‘slingshot’ form is reiterated in Unfinished Weapon, 2009. Testing the objects’ capacity to bear meaning, a giant forked log is hollowed out and holds 218 small rocks wrapped individually in paper; invisible to the viewer, 109 have ideas written on the inside and 109 are blank.

Truman Meadows, 2010-2011 is an open douglas fir and plywood box filled with soil, obsidian, and pine cones with the words ‘I WANT TO KNOW’ stenciled on all four interior sides.  It references a remote valley in the mountains north of Bishop visited by the artist many years ago.  During that visit he came to realize that the origination of meaning is the second or third step in the unfolding of understanding.

Kinmont’s work takes a corporeal turn in Home Sweet Home:  three long, rectangular plywood cases narrate the cycle of human life in three acts: the first box contains nothing but dirt; the second, a puffy, clean white pillow sits atop the dirt; the third, a flat, dirty, used pillow is pressed into the back corner.

Robert Kinmont received his education at the San Francisco Fine Arts Institute, and the University of California at Davis. His work was included in the 1968 Sculpture Annual at the Whitney Museum, New York. He exhibited at institutions such as the San Francisco Museum of Art; the de Young Museum, San Francisco; the Smithsonian Institution, Washington D.C. as well as the 1976 Biennale of Sydney and two seminal exhibitions curated by Lucy Lippard: No. 7 at Paula Cooper Gallery, New York (1969) and 557,087 at the World’s Fair Pavilion in Seattle (1969).  After 1981, his work was not exhibited until its inclusion in Mirage, a group exhibition at Alexander and Bonin curated by Julie Ault and Martin Beck.  His work was selected for “The Traveling Show” curated by Adriano Pedrosa at La Colección/Fundación Jumex in Mexico City in 2009. Additionally, Kinmont’s work is currently on view in ‘State of Mind: New California Art circa 1970’ at the Orange County Museum of Art until January 22nd; the exhibition will then travel to University of California Berkeley Art Museum and Pacific Film Archive on February, 2012. Kinmont’s work will also be included in “Ends of the Earth: Art of the Land to 1974” at the Geffen Contemporary at the Museum of Contemporary Art, Los Angeles in April, 2012 and will travel to Haus der Kunst, Munich thereafter.