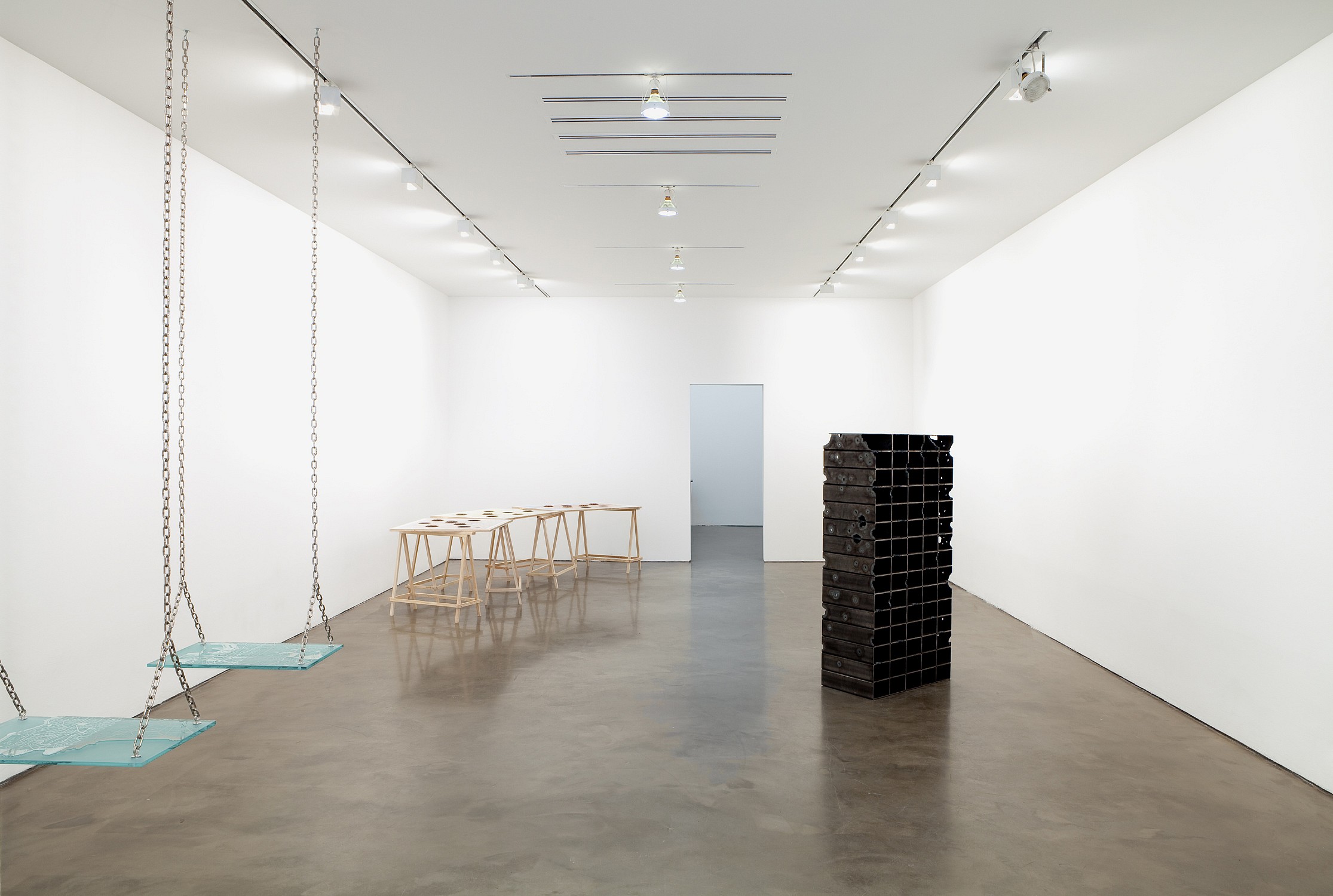 Bourj, the Arabic word for ‘tower,’ is the title of a work Hatoum created for a solo exhibition at the Beirut Art Center in 2010. This basic building structure is made up of stacked steel rectangular tube sections which have been subjected to cutting and burning giving it the appearance of a building scarred by war.  This work utilizes an altered grid structure, which Hatoum has previously explored in seminal works such as Light Sentence (1992), Current Disturbance (1996), which is currently showing at the Whitechapel Gallery in London, as well as her 2008 Cube (9x 9 x9) recently on view in “On Line” at the Museum of Modern Art in New York. In the case of Bourj there is an underlying tone of irony as the work’s maquette-like scale suggests a future construction project in which signs of destruction are already present.

Featured in the exhibition is Interior/Exterior Landscape (2010), a room-size installation of altered household furniture. A bed frame threaded with long wiry hair remains bare save for a hair-embroidered pillow at the head that depicts flight routes between the artist’s most visited cities. Two circular wire hangers framing wall drawings of the Eastern and Western hemispheres and a market bag constructed from a cut-out print of a world map hang from a metal coat rack. A merged table and chair sit against a corner and a birdcage housing a single ball of hair hangs on the adjacent wall.

3-D Cities (2008-2009) consists of printed maps of the cities of Beirut, Baghdad and Kabul mounted on tables linked by wooden trestles. The surface of the maps have several delicately cut-out parts that create concave and convex areas referring to the cycle of destruction and rebuilding that these cities have gone (and still go) through.  The recessed areas can be seen as a metaphor for bomb craters or construction sites and the protrusions can be a representation of explosions or architectural structures rising again from the rubble.

Hatoum was born into a Palestinian family in Beirut and has lived and worked in London since 1975. Her video, drawings, sculpture and installation works have been widely exhibited throughout the world.  Since 1994, there have been more than twenty solo museum and institutional exhibitions of her work, the largest and most comprehensive of which was a survey initiated by the Hamburger Kunsthalle that also traveled to Kunstmuseum Bonn, Magasin 3 Stockholm Konsthall, and the Sydney Museum of Contemporary Art (2004 - 05). Hatoum was Artist-in-Residence on the DAAD program (Berliner Künstlerprogramm, Deutscher Akademischer Austrauschdienst) in 2003-2004 and has since divided her time between Berlin and London. Her work has also been shown in the Venice Biennale (1995 and 2005), the 1995 Istanbul Biennial, and Documenta XI in 2002.  She was recently awarded the 2011 Joan Miró Prize, Barcelona.  Concurrent with the Alexander and Bonin exhibition, White Cube will present two large installations by Hatoum (February 24 - April 2) in Mason’s Yard, London.