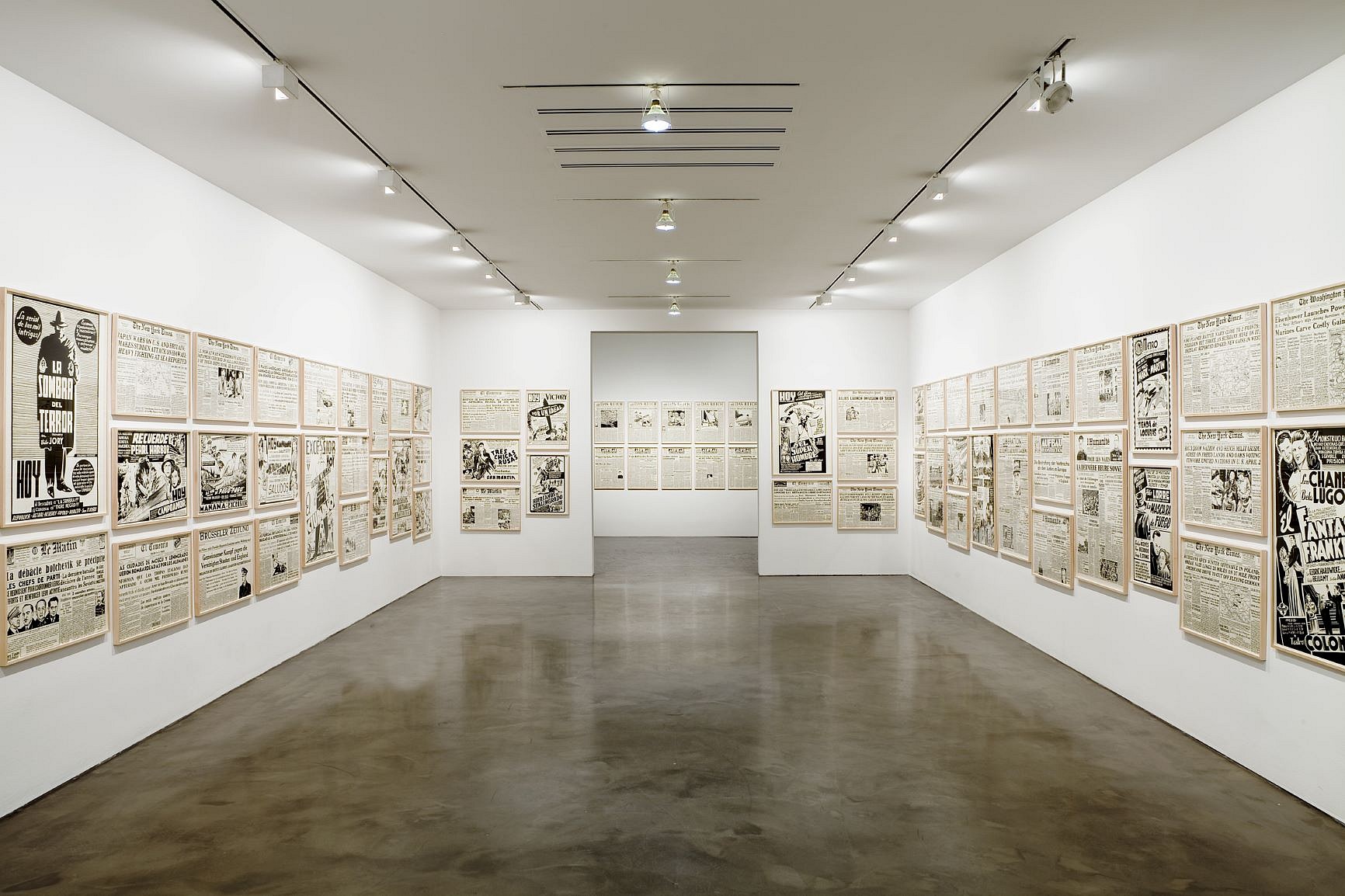 Alexander and Bonin is pleased to announce the exhibition of two new works by Fernando Bryce. This exhibition will mark the first solo presentation of Bryce’s work in the United States.

Fernando Bryce’s drawings systematically re-examine the way historical events are represented and reconstructed in real time through the media. Bryce describes his work as ‘mimetic analysis,’ which involves culling archives, for advertisements, newspaper articles, propaganda pamphlets, comics, and other print materials relating to specific political developments. He then faithfully reproduces these original documents in ink on standard paper formats.

Bryce’s two most recent works, El Mundo en Llamas and Das Reich / Aufbau focus on representations of World War II in the popular press. El Mundo en Llamas (translates as The World in Flames) is an expansive set of 95 drawings in which headlines from major world newspapers are juxtaposed against advertisements for Hollywood films, as they were rebranded at the time for a Peruvian audience. As with many of Bryce’s projects, mainstream political coverage is weighed against the spectre of cultural imperialism; news of military maneuvers is followed by celluloid depictions of heroic pilots and femme fatales dubbed in Spanish.

For Das Reich / Aufbau, Bryce has reproduced in full 14 covers of two periodicals – the German language Jewish journal, Aufbau, published then in New York, and Das Reich, a weekly newspaper founded by Joseph Goebbels – spanning the months from July to October 1944. This period, after the liberation in July of the Majdanek concentration camp by the Soviet Army, marks the beginning of the end of the war. By presenting the two publications together the viewer is able to compare the topics covered and how they might fit the ideology of the given publication. In hindsight Das Reich’s headlines (“The Utmost Effort,” “Full Display of Force,” etc.) read like fantasies of increasing power in the face of impending collapse. The differing style and formatting of these publications are also telling. Das Reich, for instance, sports a neo-classical, serifed masthead followed by one central headline. Aufbau’s masthead, by contrast, is modern, fat and angular and its multiple headlines are dispersed, and printed in different fonts. Design decisions such as these reiterate larger ideological constructs – Das Reich (and National Socialism) is teutonic and monolithic whereas Aufbau (and the Allied Front) is modern and cosmopolitan.

Fernando Bryce was born in Lima in 1965 and now divides his time between Lima and Berlin. Bryce moved to Berlin in the late 1980s where he began his work as an artist. In 2002, his work was included in Manifesta 4 in Frankfurt-am-Main; in 2003, the 8th International Istanbul Biennal; in 2004, the 26th Biennial of São Paulo and the 54th Carnegie International, Pittsburgh; in 2006, T1 - The Pantagruel Syndrome, Castello di Rivoli, Turin. In 2011 his work will be the subject of a survey exhibition organized by the Museo de Arte de Lima (MALI).