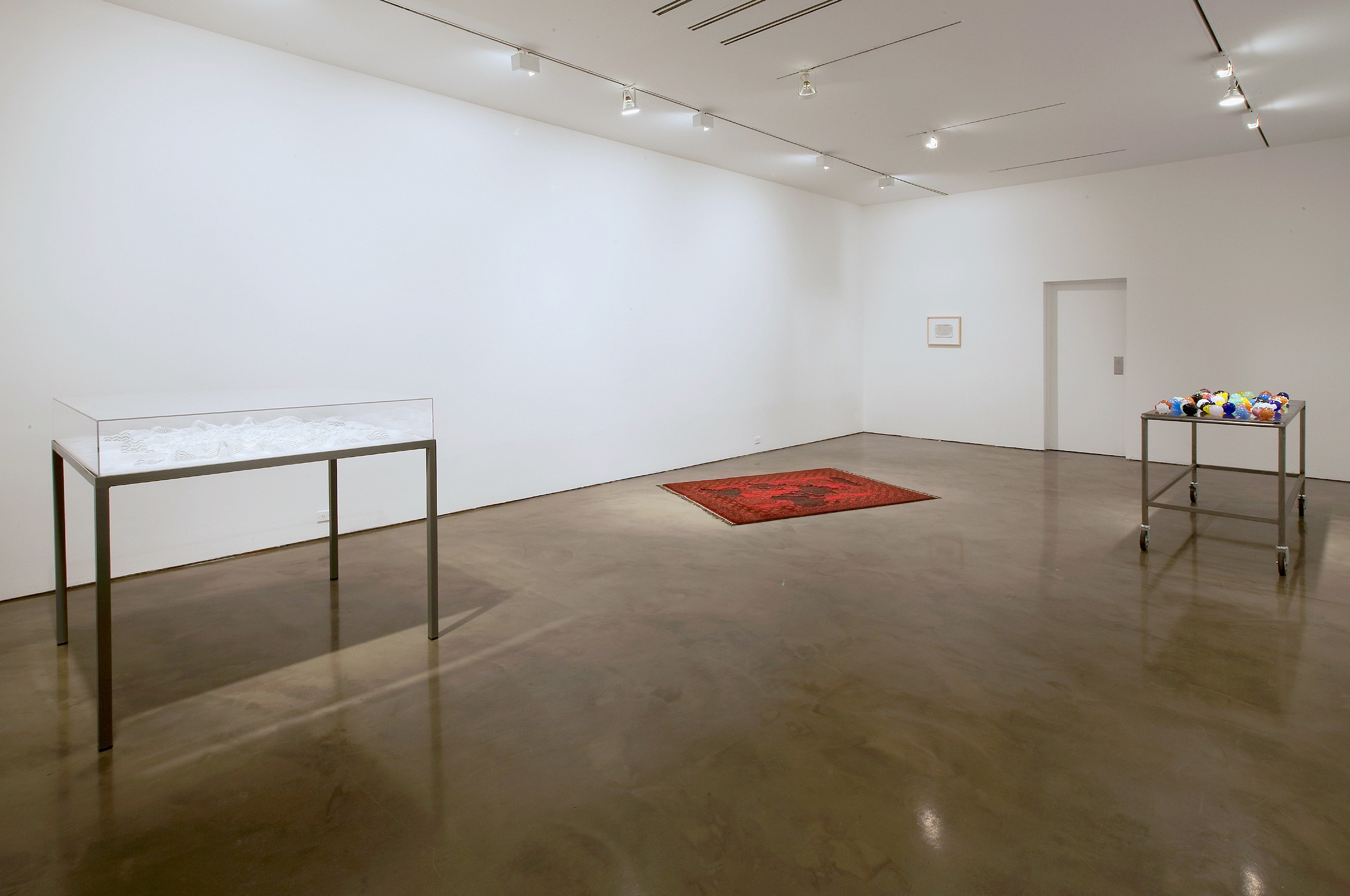 An exhibition of work by Mona Hatoum will open on January 17th. This will be her fourth solo exhibition with Alexander and Bonin.

In this exhibition, Hatoum presents new and recent works in which she revisits some of the themes that have become emblematic of her practice in the last decade. Generally innocuous everyday items are reconfigured as sculptures that address issues of threat and violence.

Misbah, (2006-07) (the title is the Arabic word for lantern) is a rotating brass lantern hanging in the middle of a dark room. Turning around it throws fleeting shadows of soldiers marching round and round in a field of starry shapes that allude to explosions. Dormiente (2008) is based on a handheld kitchen grater with curved ends. Here it is scaled up to the size of a bed that promises discomfort and pain. Despite their menacing overtones, both works reflect a poetic yet disquieting beauty.

Notions of threat are similarly referred to in a recent sculpture, Nature morte aux grenades (2006-07). A collection of colorful crystal shapes resembling hand grenades are placed on a steel and rubber trolley setting up a contradiction between the seductiveness of the material and a subtext of danger.

Hatoum has often used the map as a motif in her work, most recently through a process of material-removal. Afghan (black and red) (2009) is a traditional oriental carpet that looks as if in a state of disintegration as large patches of the weave appear to have been moth-eaten or somehow worn-out. On a second glance one can see that the apparently random patches form a recessed world map seen from above.

Hatoum was born into a Palestinian family in Beirut and has lived and worked in London since 1975. Her work has been widely exhibited in solo exhibitions in Europe, the United States, Canada and Australia. In 2004 the largest and most comprehensive survey of her work, was initiated by the Hamburger Kunsthalle and travelled to Kunstmuseum Bonn, Magasin 3 Stockholm Konsthall and the Sydney Museum of Contemporary Art (2005). Her work has also been shown in the Venice Biennale (1995 and 2005), the 1995 Istanbul Biennial, Documenta XI,  the Biennale of Sydney (2006) and the 2007 Auckland Triennial. In 2008 she exhibited new work in solo exhibitions at the DAAD Galerie, Berlin; Parasol unit, London and Darat al Funun, Amman, Jordan.

Hatoum was Artist-in-Residence on the DAAD program (Berliner Künstlerprogramm, Deutscher Akademischer Austrauschdienst ) in 2003-2004 and has since divided her time between Berlin and London.