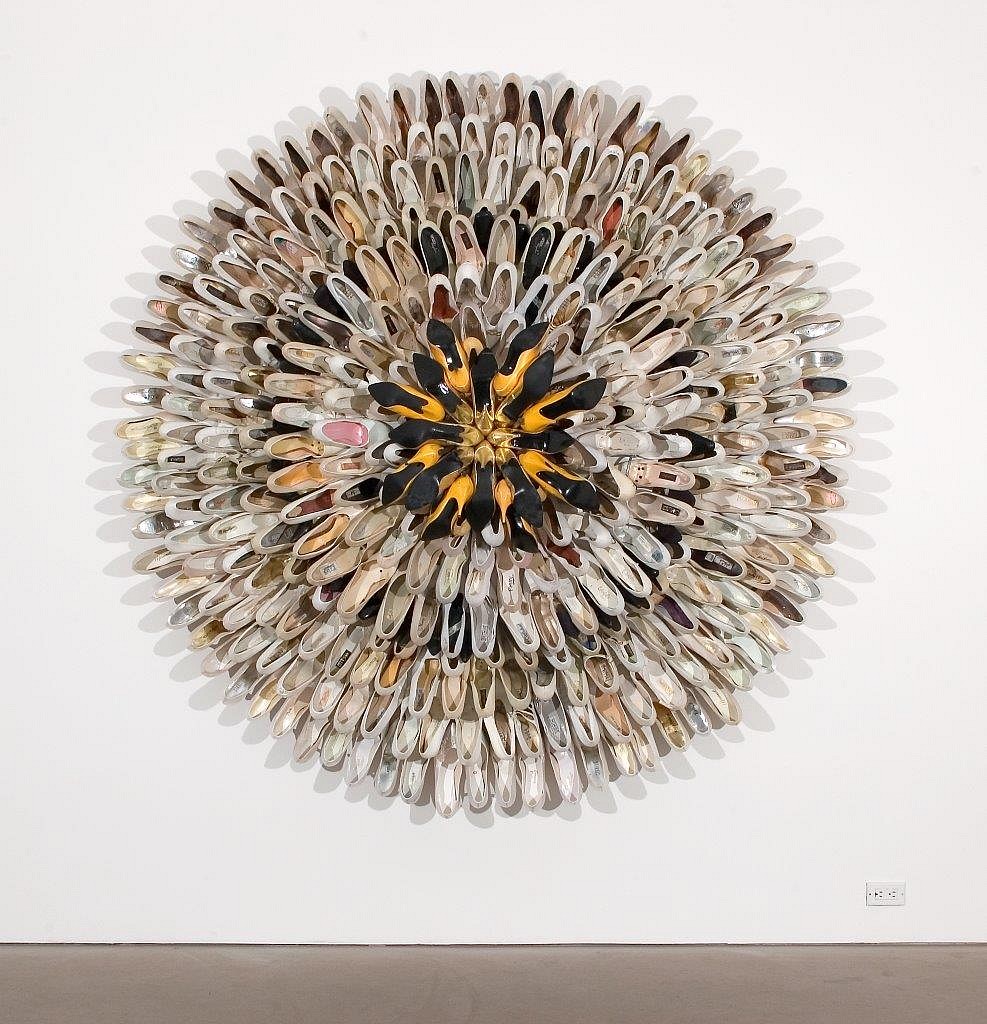 Willie Cole's exhibition of new work, titled Sole to Soul, will open at Alexander and Bonin on Saturday, January 7th, 2006.

During a 2004-05 residency at the University of Georgia, Athens, Willie Cole located a supply of several thousand pairs of high-heeled shoes which inspired him to return to the use of this particular found object. He uses the high-heeled shoe to tell an evolving story from beauty and sex to nature and tantric spirituality. The artist's interest in Buddhism has developed since the 1980's and for the work in this exhibition he has particularly referenced the mandalas and deities associated with Tibetan Buddhism.

In Sole to Soul, the shoes are formed into circles expressing the concept of lotus blossoms which die and flower again. The styles and colors of the shoes dictate the form; the blossoms range in diameter from 4 to 7 feet. In other works, referencing shrines, the halos or auras surround the intertwining legs and arms.

Willie Cole's art is about acts of transformation and transcendence. In the late 80's the artist made a conscious choice to work with used objects to take advantage of the energy transference achieved through a process of telekinesis and chi transfers.. He has used consumer and industrial detritus such hairdryers, irons, bicycle parts and shoes to make objects which reveal their nature as talismans and sometimes as a critique of capitalist and consumer culture.

Willie Cole was born in Somerville and continues to live in New Jersey. His work has been the subject of several one-person museum exhibitions including Tampa Museum of Art (2004), Miami Art Museum (2001), Bronx Museum of the Arts (2001) and the Museum of Modern Art, New York (1998). A survey exhibition of his work, organized by the University of Wyoming Art Museum is currently touring and in March 2006 his work will be the subject of a retrospective exhibition organized by the Montclair Art Museum. This exhibition will tour to five additional venues and will be accompanied by a 100 page, illustrated catalogue with essays by Leslie King-Hammond, Lowery Sims and Patterson Sims