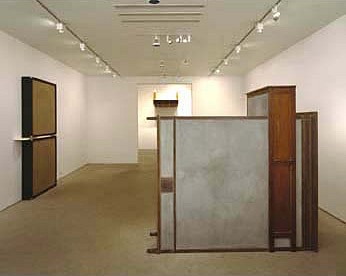 An exhibition of five sculptures by Jennifer Bolande, Willie Cole, Mona Hatoum, Rita McBride and Doris Salcedo will be on view at Alexander and Bonin beginning December 7th. Each of the five sculptures relates to real objects such as appliances, furniture and architectural features. The works date from 1989 to the present and most are being shown in New York for the first time.

Jennifer Bolande’s There, There (1990) initially appears to be a composition of found objects. Slowly one senses something is amiss as, in fact, all the elements are slyly fabricated. The arrangement and dimensions of two loudspeakers now suggest a hearth and a mirror over the mantelpiece. Bolande is known for her discreet transformations of photography into sculpture and the real into the metaphorical. Her work was recently shown in The Photogenic: Photography Through Its Metaphors in Contemporary Art at the ICA, Philadelphia and will be included in the forthcoming Living Inside the Grid at the New Museum, N.Y.

Willie Cole will exhibit a new Gas Snake. Of his September 2002 solo show at Alexander and Bonin, The New Yorker said “The New Jersey bricoleur and visual humorist is in top form with pseudo-African sculptures of bicycle parts, an X-shaped pool table…” Cole’s work is included in more than thirty permanent museum collections and has been the subject of solo exhibitions at the Bronx Museum of Art, Miami Art Museum, Museum of Modern Art, New York and the St. Louis Art Museum.

A ring of green glass bottles makes up Mona Hatoum’s Vicious Circle. This simple and elegant sculpture suggests addiction, although not necessarily the literal one implied by the wine bottles. Hatoum has often used images and objects from every day life to examine the stability of one’s foundations. Her work has been extensively exhibited throughout the world most recently at Documenta 11 and Centro Galego de Arte Contemporanea in Santiago de Compostela.

Entrance (1989) by Rita McBride is the first manifestation of her long interest in awnings. A steel canopy, striped with pigment, is suspended from the wall by heavy load strapping. This form and its slightly threatening installation evokes Minimalist steel sculpture and its pigmented surface suggests a painting hanging above us. An exhibition of McBride’s work from 1990 to the present, initially travelling from the DePont Foundation in Tilburg, remains on view at the Institut d’Art Contemporain, Villeurbanne, France until January 12, 2003. McBride received a Guggenheim Memorial Foundation Grant earlier this year.

In the largest and most complex of Doris Salcedo’s furniture and cement sculptures, Untitled 2001, two large armoires intersect, the horizontally placed larger of the two piercing the smaller vertically oriented cabinet. Salcedo’s evocative sculptures reference the violence of daily life in Colombia and have been internationally exhibited since 1995. Installations of multiple cement and furniture pieces have been presented at the Carnegie International, Pittsburgh (1995), Le Creux de l’Enfer, Thiers, France (1996), Bienal de Sao Paulo (1998) and The Liverpool Biennal of Contemporary Art (1999). A survey exhibition of her work will be presented at Museum of Contemporary Art, Los Angeles in early 2004.