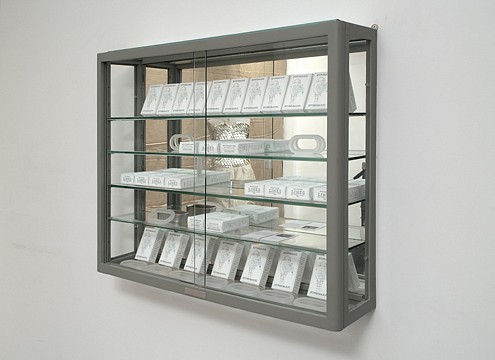 Hyperbaric–Hypobaric is an installation comprised of ten main elements including an aluminum hyperbaric chamber that houses a live sponge controlling the respiration cycle of the entire work, a Plexiglas plate engraved with the image of an atmospheric diving suit, a three hundred-link translucent chain etched with the names of evolutionary specimens, a transparent accordion, a diver’s pump, a mother-of-pearl encrusted gown mounted on a propeller, and an explanatory pigment print. The chain extends upward from the installation to the gallery’s third floor culminating with a whistling canary, fed by air piped up from the ground floor.

The tenth element is a film, Undine’s Curse, featuring many of the exhibited sculptural elements. In this filmed performance Penelope, played by Nicole Renaud, sings Monteverdi’s Di misera regina in a grotto in Northern Italy, pleading for the return of Ulysses. Leaving the grotto, she loses consciousness as she ascends into the upper atmosphere in a hot air balloon. She then emerges from the depths of the Hudson River in the hypobaric chamber reconfigured as a sedan chair, accompanied by a sea shanty written by Lincoln. The sound track, intrinsic to the installation, can be heard through a giant seashell.

Paul Etienne Lincoln was born in London in 1959. His work has been exhibited in Europe and North America since 1981 when he was included in Young Contemporaries at the Institute of Contemporary Art, London. In 2003 he exhibited two major installations New York–New York and Die Berliner Zuckerbärin in a solo exhibition at the Hamburger Bahnhof, Berlin. More recently he exhibited an early work Panhard Special, 1976, and Sinfonia Torinese, 2004, at Guido Costa Projects in Turin. The artist lives and works in New York and Venice.