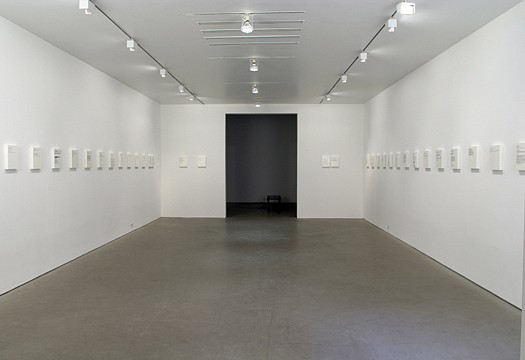 Alexander and Bonin is pleased to announce accumulations, Emily Jacir’s first exhibition with the gallery. Presented in formats that range from poetic to documentary, recurrent themes addressed by Jacir are borders, issues of movement, dislocation, radical displacement and resistance. The works in her new exhibition can be seen as ruminations on borderless formats and performative actions.

Included in the forthcoming exhibition will be Inbox (2004-05) a single work comprised of approximately forty paintings, each the size of a standard, 11 x 8 ½ inch, sheet of paper. Using oil paint, Jacir painstakingly transcribed selected email correspondence she has collected since 1998 onto individual wood panels. Collectively, these selections from her archive represent an expanded moment in time as well as a narrative of world events, both cultural and political. A diary written by others, Inbox, ranges from serious to humorous and is ultimately autobiographical. This work was originally commissioned by Kunstraum, Innsbruck.

Ramallah/New York, a two channel video, was shot in 2004 and is informed by the artist’s experience of living in Ramallah and New York for the past six years. The video, a kind of experimental documentary, interweaves images of travel agencies, hairdressers, delis, shwarma shops, and arghile bars in both sites, whilst recording the movement of people to and from these two locales. Collectively, they record the spaces between war, exile and destruction, and preserve an account of steadfastness. It is a record of local, public and daily exchange in both sites and between them. In this work, Jacir documents a specific time which takes place in daily life as opposed to the official representations and narratives of history, CNN or Al-Jazeera. Ramallah/New York examines both the safety and familiarity of interiors as well as their entrapment and claustrophobia and is an homage to the transcendence of spaces beyond official borders and actual sites.

In 2003, Jacir exhibited Where We Come From, a series of text and photo works that documented the response and action generated by the question to fellow Palestinians: “If I could do anything for you, anywhere in Palestine, what would it be?” Nearly 30 requests were completed and are visually demonstrated in photographs exhibited alongside the request and origins of each individual. First exhibited at Debs & Co., New York, Where We Come From, has subsequently been shown in Ramallah, Istanbul, Oxford and Bremen. A portion of the work was included in the 2004 Whitney Biennial. The complete series is on view at the Ulrich Museum of Art, Wichita through March 6th.

Emily Jacir works in a wide variety of mediums which have included video, photography, drawing and sculpture. Born in Bethlehem in 1970, she studied at University of Dallas at Irving, Memphis College of Art and the Whitney Independent Study Program. She lives and works in New York and Ramallah. Her work will be included in the forthcoming Sharjah International Biennial- Session 7.