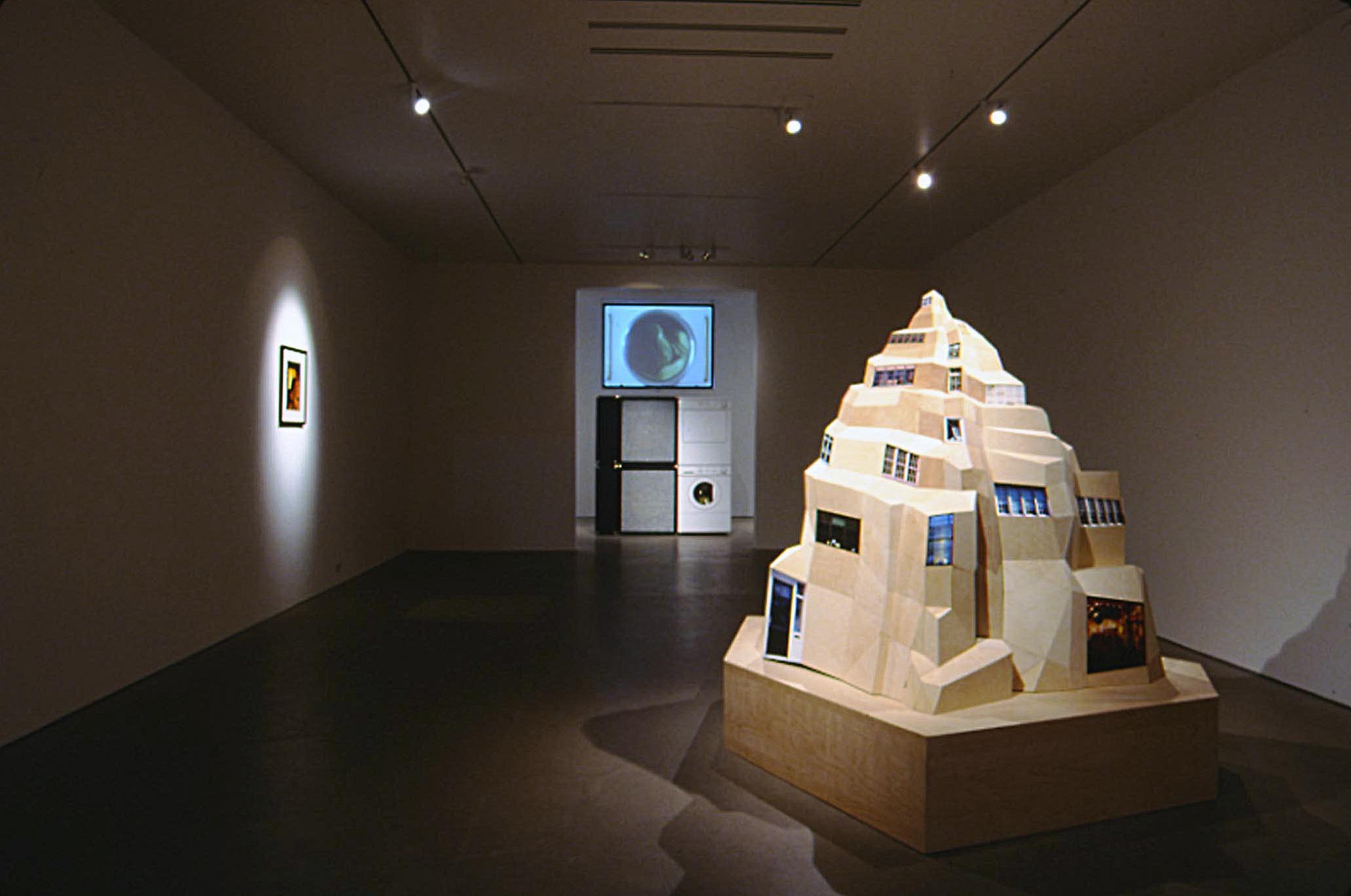 Alexander and Bonin is pleased to announce an exhibition of new work by Jennifer Bolande. The works in this exhibition recombine several of her most characteristically employed elements: speakers, appliances, movies, mountains, and planets. Continuing an investigative path begun in 1983, Bolande examines linguistic, emotional and physical responses to the world. The exhibition presents two new large-scale works, which conflate geology and geometry and examine different perspectives on the planet earth.

The exhibition features a geometrically complex “building” that references the organic shape of a mountain. The windows of this “building” are photographs from Bolande’s ongoing photographic series, “Globe Sightings,” which document found instances of globes seen in windows. The “faces” of this crystalline mountain — and therefore its overall structural form as well — are determined by the perspectival angles of the photographed windows. In this piece, Bolande turns these representations of the globe into the building blocks of a topographical form that blurs architecture and landscape, and inverts notions of inside and outside.

“Earthquake,” a sculptural installation including a 16mm film and a sound component and title centers on a large cube of appliances and speakers. The structure echoes Bolande’s numerous works of the past twenty years with stacks of speakers. The film recalls Bolande’s fascination with all things filmic: from contact sheets to the mechanics of projection. Its mutating image of a green towel rotating in a clothes dryer provides a hypnotic and peculiarly voyeuristic experience, which is disrupted and counterbalanced by the audio component.

One work mines representations of earth, while the other engages with the physical experience of being on earth, calling its solidity into question. Together, these works represent the variety of ways Bolande looks at objects whose connections are not initially apparent. Tracking a line of correspondence she “proceeds obliquely but precisely toward an accumulation of possible meanings.”[1]

Jennifer Bolande is one of the initial artists to fold together the mediums of photography and sculpture and pioneered in an elegiac form of conceptual art. Her first New York exhibition, held at The Kitchen in 1982, included a theatrically lit and designed set for her photographs. Bolande began her exploration of art with dance, and performance, in addition to visual art. Over the ensuing years, objects amplified from, and incorporating photographs were exhibited at Nature Morte and Metro Pictures, NY. In Europe gallery exhibitions in Paris and Stockholm were followed by solo shows at the Kunstraum, Munich and the Kunsthalle Palazzo, Basel.  In 2003, she exhibited the Globe Sightings series at the Fotohof Galerie in Salzburg. Since 2003 she has taught in the New Genres Department at UCLA.