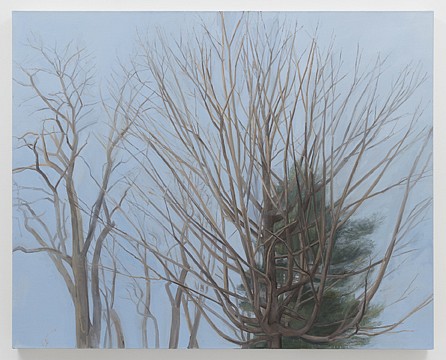 Sylvia Plimack Mangold will exhibit recent paintings and watercolors at Alexander and Bonin from April 12 – May 17, 2003. Plimack Mangold will show paintings and watercolors of two motifs – the Maple Tree and the Pin Oak. These two trees, located on her property in Washingtonville New York have been the sole subjects of her work since 1997. Her paintings, drawing and etchings are all made from direct observation and in many cases, created outdoors in the landscape. Concerning this concentration on two motifs, she has written:

“There are qualities which are important for me to achieve – and I can do this by the familiarity and knowledge I get by looking at these forms day after day. In the Pin Oak paintings I am mostly looking up – to see the very upper part of the tree…in the winter the forms are clear…in the summer, the foliage creates a dramatic crown of the tree. The Maple Tree is more self-contained – the limbs grow upward and orbit the trunk. Differences in the light contribute to a variety of feelings in the paintings.”

Plimack Mangold is known for her painted investigations of observed subjects. In the 1960s and early 1970s her images were the floors of her house or studio. The formality of parallel floorboards or grids of linoleum tiles connected her work to that of her peers. The floors were succeeded by or combined with other images (mirrors, rulers, lengths of masking tape) whose rectilinearity further referenced geometric structures. By the late 1970s Plimack Mangold’s eye was drawn to the landscape. Initially seen as an image through a window or as a drawing ‘taped’ to the studio wall, it increasingly occupied the surface of her canvases, gradually pushing out to the painting’s physical edges. By the mid-1980s the trees in the landscape became her exclusive subject matter. Her work has been the subject of three traveling museum surveys and her paintings are included in more than twenty permanent museum collections including Museum of Fine Arts, Boston, Dallas Museum of Art, Detroit Institute of Art, Walker Art Center and The Whitney Museum of Art.