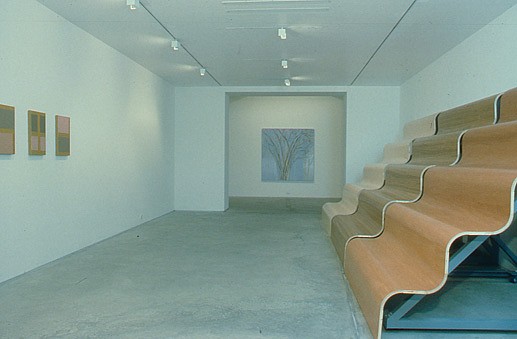 This summer Alexander and Bonin will present a two-person exhibition of Rita McBride and Sylvia Plimack Mangold with occasional guest appearances by other artists.

Rita McBride will exhibit work shown recently at the Worcester Art Museum in Massachusetts. Arena Seating consists of three structures made of undulating plywood with maple, mahogany and teak veneers mounted on steel frames. Placed against one long wall of the gallery they resemble bleacher seating, transforming the gallery into an arena. The wall opposite Arena Seating becomes a stage for an ongoing series of guest appearances by other artists. This idea was used by McBride for a series of guest performances within a large installation she showed at the Kunstverein, Munich in early 1999.

Sylvia Plimack Mangold will exhibit two paintings, one early and one recent. The early piece will be from a series of ‘floor’ paintings that Plimack Mangold painted in the 1970’s. Her recent painting is from the ‘tree portraits’ she has painted since the late 1980’s. The two works will be separated by the long gallery containing McBride’s work, suggesting a journey in time.

Other common interests include the viewpoint of observation – both the artist’s and the exhibition visitor’s. The artists also share an interest in natural materials and their transformation into components of an interior.

Rita McBride has exhibited internationally since 1990. She has had one-person museum exhibitions at the Des Moines Art Center and Witte de With Center for Contemporary Art, Rotterdam (1997). Recently, a

comprehensive monograph was published to accompany a two gallery exhibition at Annmarie Verna and Mai 36 galleries in Zürich.   As the recipient of a DAAD grant, McBride currently resides in Berlin.