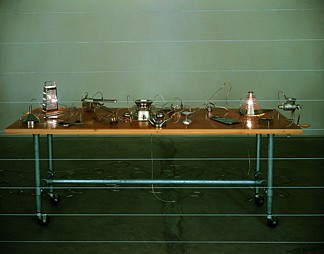 Alexander and Bonin is pleased to announce an exhibition of new sculpture by Mona Hatoum. This will be Hatoum’s first New York exhibition since the highly regarded survey of her work at the New Museum in 1997.

Hatoum will exhibit works made during the past two years in London, San Antonio and Turin.   Several works take the form of furniture – tables, a daybed and a carpet. Hatoum’s use of unusual materials make them into either fragile or macabre objects.

A few recent works are based on cages, an image and theme in some of Hatoum’s most well-known pieces (i.e. Light Sentence, 1992 and Current Disturbance,1996).   Isolette references a trip to Cairo and works such as Incommunicado, an early crib sculpture. Here, scale changes the familiar into the disquieting.

Mona Hatoum has had recent one-person museum shows at the Kunsthalle Basel, Castello di Rivoli and, concurrent with this exhibition, Le Creux de l’Enfer in Thiers, France. In Spring 2000 she will exhibit new work at the Tate Gallery, London. A comprehensive monograph on her work was published by Phaidon Press in 1997. Several of the works in the exhibition were originally commissioned by ArtPace, A Foundation for Contemporary Art, San Antonio.