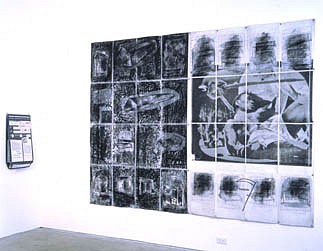 Eugenio Dittborn will have his first New York gallery exhibition at Alexander and Bonin from October 29th - December 5th, 1998.

The exhibition, entitled Taciturna, will include 2-panel and 3-panel airmail paintings as opposed to the 1997 exhibition at the New Museum which focused on Dittborn's largest works. Taciturna is meant, in its smaller scale works, to convey a more concentrated and self-reflective state.

The airmail painting has been Dittborn's primary occupation since 1984. Initially executed on large sheets of brown paper, which could be folded down to one-sixteenth of its size and sent in large envelopes through the international mail system, he switched in 1986 to a felt-like non woven fabric as the support and more recently to cotton duck -- the material on which most of the Taciturna show is made. The envelopes provide an extensive amount of information including an itinerary of every place that a particular airmail painting has traveled to as well as a text about the work. The airmail envelopes are always exhibited with the paintings and viewers are encouraged to read the different texts on each envelope.

Dittborn uses a variety of subjects and processes in his airmail paintings. Images from news stories, how-to-draw books, crime journals and anthropological studies are combined with drawings made by children and schizophrenics. These images are often photographically enlarged and silkscreened onto small pieces of fabric which are then stitched to the larger panels and stained with paint.

Eugenio Dittborn was born in Santiago, Chile in 1943 and continues to live and work there. He has exhibited his work internationally since 1984 when airmail began to take his works to far-off places. His work has been extensively exhibited in Australia and Europe. In 1993, a large survey exhibition was organized by Witte de With, Rotterdam with a smaller version travelling to the ICA, London. The New Museum show was expanded for an exhibition held at the Museo de Bellas Artes, Santiago in 1998. Dittborn's work has also been shown in Documenta IX, the Museum of Modern Art's 1992 survey Latin American Artists of the 20th Century, Cocido y Crudo at the Reina Sofia (1994) and About Place at the Art Institute of Chicago (1995). There are five major publications on Dittborn's work: Camino Way (1991, self-published, Santiago); Mapa (1993, published by Witte de With and ICA, London); Remota (1997, New Museum, New York and Museo de Bellas Artes, Santiago); Mundana (1998, self-published, Santiago) and Pinturas Aeropostais, (Instituto de Arte Contemporânea, Lisbon).